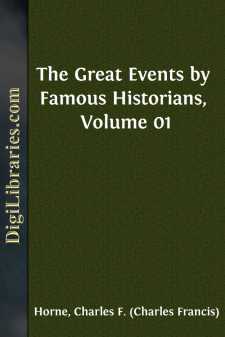 THE GREAT EVENTS BY FAMOUS HISTORIANS is the answer to a problem which has long been agitating the learned world. How shall real history, the ablest and profoundest work of the greatest historians, be rescued from its present oblivion on the dusty shelves of scholars, and made welcome to the homes of the people?

THE NATIONAL ALUMNI, an association of college men, having given this question long and earnest discussion among themselves, sought finally the views of a carefully elaborated list of authorities throughout America and Europe. They consulted the foremost living historians and professors of history, successful writers in other fields, statesmen, university and college presidents, and prominent business men. From this widely gathered consensus of opinions, after much comparison and sifting of ideas, was evolved the following practical, and it would seem incontrovertible, series of plain facts. And these all pointed toward "THE GREAT EVENTS."

In the first place, the entire American public, from top to bottom of the social ladder, are at this moment anxious to read history. Its predominant importance among the varied forms of literature is fully recognized. To understand the past is to understand the future. The successful men in every line of life are those who look ahead, whose keen foresight enables them to probe into the future, not by magic, but by patiently acquired knowledge. To see clearly what the world has done, and why, is to see at least vaguely what the world will do, and when.

Moreover, no man can understand himself unless he understands others; and he cannot do that without some idea of the past, which has produced both him and them. To know his neighbors, he must know something of the country from which they came, the conditions under which they formerly lived. He cannot do his own simple duty by his own country if he does not know through what tribulations that country has passed. He cannot be a good citizen, he cannot even vote honestly, much less intelligently, unless he has read history. Fortunately the point needs little urging. It is almost an impertinence to refer to it. We are all anxious, more than anxious to learn—if only the path of study be made easy.

Can this be accomplished? Can the vanishing pictures of the past be made as simply obvious as mathematics, as fascinating as a breezy novel of adventure? Genius has already answered, yes. Hand to a mere boy Macaulay's sketch of Warren Hastings in India, and the lad will see as easily as if laid out upon a map the host of interwoven and elaborate problems that perplexed the great administrator. Offer to the youngest lass the tale told by Guizot of King Robert of France and his struggle to retain his beloved wife Bertha. Its vivid reality will draw from the girl's heart far deeper and truer tears than the most pathetic romance.

We begin to realize that in very truth History has been one vast stupendous drama, world-embracing in its splendor, majestic, awful, irresistible in the insistence of its pointing finger of fate. It has indeed its comic interludes, a Prussian king befuddling ambassadors in his "Tobacco Parliament"; its pauses of intense and cumulative suspense, Queen Louise pleading to Napoleon for her country's life; but it has also its magnificent pageants, its gorgeous culminating spectacles of wonder. Kings and emperors are but the supernumeraries upon its boards; its hero is the common man, its plot his triumph over ignorance, his struggle upward out of the slime of earth.

Yet the great historians are not being widely read. The ablest and most convincing stories of his own development seem closed against the ordinary man. Why? In the first place, the works of the masters are too voluminous. Grote's unrivalled history of Greece fills ten large and forbidding volumes. Guizot takes thirty-one to tell a portion of the story of France. Freeman won credit in the professorial world by devoting five to the detailing of a single episode, the Norman Conquest. Surely no busy man can gather a general historic knowledge, if he must read such works as these! We are told that the great library of Paris contains over four hundred thousand volumes and pamphlets on French history alone. The output of historic works in all languages approaches ten thousand volumes every year. No scholar, even, can peruse more than the smallest fraction of this enormously increasing mass....