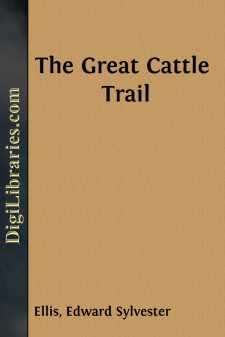 Avon Burnet, at the age of eighteen, was one of the finest horsemen that ever scurried over the plains of Western Texas, on his matchless mustang Thunderbolt.

He was a native of the Lone Star State, where, until he was thirteen years old, he attended the common school, held in a log cabin within three miles of his home, after which he went to live with his uncle, Captain Dohm Shirril, with whom the orphan son of his sister had been a favorite from infancy.

Avon was bright, alert, unusually active, and exceedingly fond of horses from the time he was able to walk. His uncle had served through the Civil War in the Confederate army, returning to Texas at the close of hostilities, thoroughly “reconstructed,” and only anxious to recover his fortunes, which had been scattered to the four winds of heaven during the long, bitter struggle.

The captain had no children of his own, and it was natural, therefore, that he and his wife should feel the strongest attachment for the boy who was placed in their care, and who, should his life be spared, would inherit whatever his new parents might be able to leave behind them when called to depart.

Avon had reached the age named, when to his delight he was told that he was to accompany the large herd of cattle which was to be driven northward, through upper Texas, the Indian Nation, and Kansas over the Great Cattle Trail, along which hundreds of thousands of hoofs have tramped during the years preceding and following the War for the Union.

Young as was our hero, he had served his apprenticeship at the cattle business, and was an expert at the round-up, in branding, in cutting out, in herding, and all the arduous requirements of a cowboy’s life. It was understood, therefore, that he was to be rated as a full hand among the eight men who, under his uncle, were to have charge of two thousand cattle about to start on the long tramp northward.

“It’s the hardest kind of work,” said the captain to his nephew, as the two sat in the low, flat structure where the veteran made his home, with his wife and one colored servant, “but I haven’t any fear that you will not pull through all right.”

“If I am not able to do so now, I never shall be,” replied Avon, with a smile, as he sat on the rough, home-made stool, slowly whittling a piece of wood, while his aunt, looking up from her sewing, remarked in her quiet way:

“It will be lonesome without Avon.”

“But not so bad as when uncle was off to the war,” ventured the youth, gazing affectionately at the lady.

The captain was sitting with his legs crossed, slowly smoking the old briarwood which he had carried through many a fierce campaign, and seemingly sunk in deep thought. Like his nephew, he was clad in the strong serviceable costume of the Texan cowboy, his broad sombrero resting with a number of blankets on pegs in the wall.

It was evening, with a cold, piercing wind almost like one of the cutting northers blowing around the homely structure. The herd were gathered at a point about five miles to the northward, whence the real start was to be made at an early hour on the morrow....