The Grammar of English Grammars 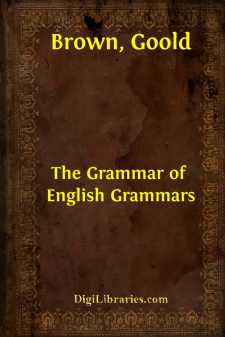 CHAPTER I. OF THE SCIENCE OF GRAMMAR.

1. Language, in the proper sense of the term, is peculiar to man; so that, without a miraculous assumption of human powers, none but human beings can make words the vehicle of thought. An imitation of some of the articulate sounds employed in speech, may be exhibited by parrots, and sometimes by domesticated ravens, and we know that almost all brute animals have their peculiar natural voices, by which they indicate their feelings, whether pleasing or painful. But language is an attribute of reason, and differs essentially not only from all brute voices, but even from all the chattering, jabbering, and babbling of our own species, in which there is not an intelligible meaning, with division of thought, and distinction of words.

2. Speech results from the joint exercise of the best and noblest faculties of human nature, from our rational understanding and our social affection; and is, in the proper use of it, the peculiar ornament and distinction of man, whether we compare him with other orders in the creation, or view him as an individual preëminent among his fellows. Hence that science which makes known the nature and structure of speech, and immediately concerns the correct and elegant use of language, while it surpasses all the conceptions of the stupid or unlearned, and presents nothing that can seem desirable to the sensual and grovelling, has an intrinsic dignity which highly commends it to all persons of sense and taste, and makes it most a favourite with the most gifted minds. That science is Grammar. And though there be some geniuses who affect to despise the trammels of grammar rules, to whom it must be conceded that many things which have been unskillfully taught as such, deserve to be despised; yet it is true, as Dr. Adam remarks, that, "The study of Grammar has been considered an object of great importance by the wisest men in all ages."—Preface to Latin and English Gram., p. iii.

3. Grammar bears to language several different relations, and acquires from each a nature leading to a different definition. First, It is to language, as knowledge is to the thing known; and as doctrine, to the truths it inculcates. In these relations, grammar is a science. It is the first of what have been called the seven sciences, or liberal branches of knowledge; namely, grammar, logic, rhetoric, arithmetic, geometry, astronomy, and music. Secondly, It is as skill, to the thing to be done; and as power, to the instruments it employs. In these relations, grammar is an art; and as such, has long been defined, "ars rectè scribendi, rectèque loquendi" the art of writing and speaking correctly. Thirdly, It is as navigation, to the ocean, which nautic skill alone enables men to traverse. In this relation, theory and practice combine, and grammar becomes, like navigation, a practical science....