The Government Class Book Designed for the Instruction of Youth in the Principles of Constitutional Government and the Rights and Duties of Citizens. 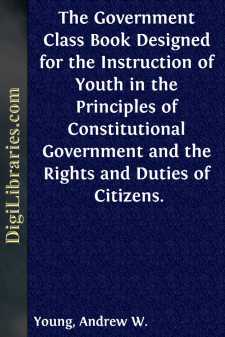 Chapter I. Mankind fitted for Society, and for Civil Government and Laws.

§1. Mankind are social beings. They are by nature fitted for society. By this we mean that they are naturally disposed to associate with each other. Indeed, such is their nature, that they could not be happy without such association. Hence we conclude that the Creator has designed men for society. It can not, therefore, be true, as some say, that the savage state is the natural state of man.

§2. Man is so formed that he is dependent upon his fellow men. He has not the natural strength of other animals. He needs the assistance of creatures like himself to protect and preserve his own being. We can hardly imagine how a person could procure the necessaries of life without such assistance. But men have the gifts of reason and speech. By conversation they are enabled to improve their reason and increase their knowledge, and to find methods of supplying their wants, and of improving their social condition.

§3. But, although men need the assistance of each other, they are so formed that each must have the care of himself. If every man were fed and clothed from a common store, provided by the labor of all, many, depending upon the labor of others, would be less industrious than they now are. By the present arrangement in society, which obliges every man to provide for his own wants, more is earned, a greater number are cared for, and the general welfare is better promoted than would be done if each labored for the benefit of all.

§4. From this arrangement comes the right of property. If each man's earnings should go into a common stock for the use of all, there would be nothing that any one could call his own. But if each is to provide for himself, he must have a right to use and enjoy the fruits of his own labor.

§5. But all men in society have the same rights. Therefore, in laboring to supply our wants, and to gratify our desires, we can not rightfully do so any further than is consistent with the rights of others. Hence we see the necessity of some established rules for securing to every member of society the free enjoyment of what justly belongs to him, and for regulating his conduct toward his fellow-members.

§6. These rules for regulating the social actions of men, are called laws. Law, in a general sense, is a rule of action, and is applied to all kinds of action. But in its limited and proper sense, it denotes the rules of human action prescribing what men are to do, and forbidding what they are not to do.

§7. We have seen that man is fitted for society, and that laws are necessary to govern the conduct of men in the social state. We see also that mankind are fitted by nature for government and laws. Man is also a moral being. The word moral has various significations. Sometimes it means only virtuous, or just; as, a moral man; that is, a man of moral character, or who lives a moral life; by which is meant that the conduct of the man is just and right.

§8. But in a wider sense, the word moral relates to the social actions of men, both right and wrong....