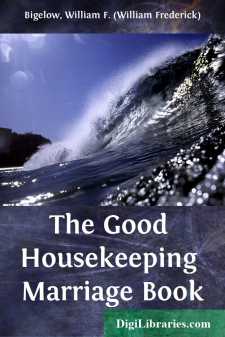 The articles that are printed in this book made what was in my opinion the most important, the most constructive, series on a single subject that Good Housekeeping has published in the quarter century and more that I was its editor. And they might so easily never have been written—just a little item in a newspaper missed, or its significance overlooked, and these sincere and helpful articles would still be locked up in the minds and hearts of the men and women who wrote them. For it all happened just like that. Students in one of the larger California universities asked that a course in marriage relations be given—and a New York newspaper heralded it with a stick of type over about page 10.

Somehow the item impressed me deeply. Here were thousands of students of both sexes, thinking of marriage, physically impelled toward marriage, admitting that they wanted more information about marriage before undertaking it. Add to these students the hundreds of thousands in other colleges and to them the millions of young men and young women outside of college—and there was Youth itself, visioning marriage as the Great Adventure, which no one should miss, but about which there were grave reports.

I have heard lots about Youth in recent years—its lackadaisical attitude toward all serious things, its tendency to look the moral code straight in the eye and smash it, its belief that chastity isn't worth its cost or success in marriage worth working for. And I had disbelieved much that I had heard, it having been my privilege to work with and for young people in high school and college over a long period of years. I knew that Youth is looking for something better than it is being given in either precept or example. And so this request of a group of college young people seemed to me to be both a challenge and an opportunity.

I accepted the challenge. The next step was to find out how best to meet it. It seemed to me that to offer our young people anything less than the best that I could get would be letting them down. So I turned for advice to several college men who had made a long study of the problems involved in marriage, and from the various lists of subjects and authors suggested—adding a few of my own—selected the group now presented in permanent form in this book. If these articles make success in marriage seem something that must constantly be worked for, they at the same time show that success, plus the happiness that goes with it, can be achieved. Which is all, I think, that any man or woman has a right to ask for.

If by some strange chance, not a vestige of us descended to the remote future save a pile of our schoolbooks or some examination papers, we may imagine how puzzled an antiquarian of the period would be on finding in them no indication that the learners were ever likely to be parents. "This must have been the curriculum for their celibates," we may fancy him concluding. "I perceive here an elaborate preparation for many things; especially for reading the books of extinct nations and of coexisting nations (from which, indeed, it seems clear that these people had very little worth reading in their own tongue); but I find no reference whatever to the bringing up of children....