The Golden Treasury of American Songs and Lyrics 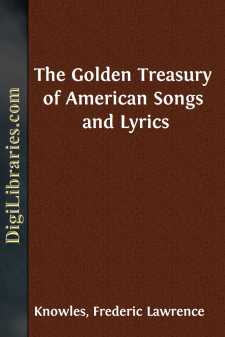 The numerous collections of American verse share, I think, one fault in common: they include too much. Whether this has been a bid for popularity, a concession to Philistia, I cannot say; but the fact remains that all anthologies of American poetry are, so far as I know, more or less uncritical. The aim of the present book is different. In no case has a poem been included because it is widely known. The purpose of this compilation is solely that of preserving, in attractive and permanent form, about one hundred and fifty of the best lyrics of America.

I am quite aware of the danger attending such exacting honor-rolls. At best, an editor's judgment is only personal, and the realization of this fact gives me no small diffidence in attempting to decide what American lyrics are best worthy of preservation. That every reader of the "American Treasury" will find some favorite poem omitted, there can be little doubt. But the effort made in this book towards a careful estimate of our lyrical poetry is at any rate, I feel sure, in a good direction.

There appear in the index of Mr. Stedman's "Poets of America" the names of over three hundred native writers. American verse in the last half century has been extraordinarily prolific. It would seem that the time has come, in the course of our national literature, for proving all things and holding fast that which is good.

The fact that the title of this compilation instantly calls to mind that of Mr. Palgrave's scholarly collection of English lyrics need not prove a disadvantage to the book if the purpose which led to the choice of name is understood. The verse of a single century produced in a new country should not be expected to equal the poetic wealth of an old and intellectual nation. But if American poetry cannot hope to rival the poetry of the mother country, it may at least be compared with it; and the fact of such a comparative point of view will aid rather than hinder the student of our native poetry in estimating its value.

American verse has suffered at the hands both of its admirers and its enemies. Injudicious praise, no less than supercilious contempt, has reacted unfavorably on the fame of our poets. Again and again has some minor versifier been hailed as the "American Keats" or the "American Burns." Really excellent poets, though distinctly poets of second rank, have been elevated amid the blare of critical trumpets to the company of Wordsworth and Milton. All this is unprofitable and silly. But not much better is the attitude of certain critics who patronize everything in the English language which has been written outside of England. Though America has added—leaving Poe out of account—no distinctly new notes to English poetry, it has added certainly not a few true ones. A nation need never apologize for its literature when it has produced such lyrics—to go no further—as "On a Bust of Dante," "Ichabod," "The Chambered Nautilus," and the "Waterfowl."

My method of arrangement is roughly chronological....