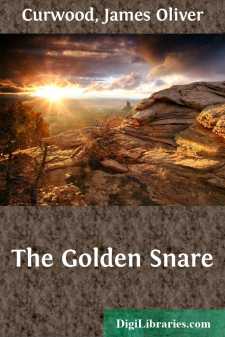 Bram Johnson was an unusual man, even for the northland. He was, above all other things, a creature of environment—and necessity, and of that something else which made of him at times a man with a soul, and at others a brute with the heart of a devil. In this story of Bram, and the girl, and the other man, Bram himself should not be blamed too much. He was pathetic, and yet he was terrible. It is doubtful if he really had what is generally regarded as a soul. If he did, it was hidden—hidden to the forests and the wild things that had made him.

Bram's story started long before he was born, at least three generations before. That was before the Johnsons had gone north of Sixty. But they were wandering, and steadily upward. If one puts a canoe in the Lower Athabasca and travels northward to the Great Slave and thence up the Mackenzie to the Arctic he will note a number of remarkable ethnological changes. The racial characteristics of the world he is entering change swiftly. The thin-faced Chippewa with his alert movements and high-bowed canoe turns into the slower moving Cree, with his broader cheeks, his more slanting eyes, and his racier birchbark. And even the Cree changes as he lives farther north; each new tribe is a little different from its southernmost neighbor, until at last the Cree looks like a Jap, and the Chippewyan takes his place. And the Chippewyan takes up the story of life where the Cree left off. Nearer the Arctic his canoe becomes a skin kaiak, his face is still broader, Ms eyes like a Chinaman's, and writers of human history call him Eskimo.

The Johnsons, once they started, did not stop at any particular point. There was probably only one Johnson in the beginning of that hundred year story which was to have its finality in Bram. But there were more in time. The Johnson blood mixed itself first with the Chippewa, and then with the Cree—and the Cree-Chippewa Johnson blood, when at last it reached the Eskimo, had in it also a strain of Chippewyan. It is curious how the name itself lived. Johnson! One entered a tepee or a cabin expecting to find there a white man, and was startled when he discovered the truth.

Bram, after nearly a century of this intermixing of bloods, was a throwback—a white man, so far as his skin and his hair and his eyes went. In other physical ways he held to the type of his half-strain Eskimo mother, except in size. He was six feet, and a giant in strength. His face was broad, his cheek-bones high, his lips thick, his nose flat. And he was WHITE. That was the shocking thing about it all. Even his hair was a reddish blonde, wild and coarse and ragged like a lion's mane, and his eyes were sometimes of a curious blue, and at others—when he was angered—green like a cat's at night-time.

No man knew Bram for a friend. He was a mystery. He never remained at a post longer than was necessary to exchange his furs for supplies, and it might be months or even years before he returned to that particular post again....