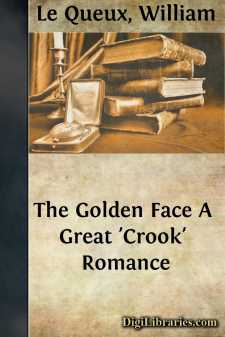 CHAPTER I PRIVATE AND PERSONAL

In order to ease my conscience and, further, to disclose certain facts which for the past year or two have, I know, greatly puzzled readers of our daily newspapers, I have decided to here reveal some very curious and, perhaps, sensational circumstances.

In fact, after much perplexity and long consideration, I have resolved, without seeking grace or favor, to make a clean breast of all that happened to me, and to leave the reader to judge of my actions, and either to condemn or to condone my offenses.

I will begin at the beginning.

It has been said that service in the Army has upset the average man’s chances of prosperity in civil life. That, I regret, is quite true.

When I, George Hargreave, came out of the Army after the Armistice, I found myself, like many hundreds of other ex-officers, completely at a loose end, without a shilling in the world over and above the gratuity of between two and three hundred pounds to which my period of commissioned service entitled me.

Grown accustomed during the war, however, to fending for myself and overcoming difficulties and problems of one sort and another, I at once set to work to look about for any kind of employment for which I fancied I might be fitted. After answering many advertisements to no purpose, I one day happened upon one in The Times which rather stirred my curiosity.

It stated that a gentleman of good position, who had occasion to travel in many parts of the world, would like to hear from a young man with considerable experience in motor driving. The applicant should not be over thirty, and it was essential that he should be a gentleman and well educated, with a knowledge of foreign languages if possible; also that he should be thoroughly trustworthy and possessed of initiative. The salary would be a very liberal one.

Application was to be made by letter only to a certain box at the office of The Times.

I wrote at once, and received some days later a reply signed “per pro Rudolph Rayne,” asking me to call to see the advertiser, who said he would be awaiting me at a certain small hôtel-de-luxe in the West End at three o’clock on the following afternoon.

I arrived at the highly aristocratic hotel at five minutes to three, and was conducted to a private sitting-room by a page who, on ushering me in, indicated a good-looking, middle-aged man seated near the window, reading a newspaper and smoking a cigar.

The gentleman looked up as I approached, then put down his paper, rose, and extended his hand.

“Mr. George Hargreave?” he inquired in a pleasant voice.

He bowed, and pointed to a chair close to his own. Then he sat down again, and I followed his example.

“I have received hundreds of replies to my advertisement,” was his first remark, “and the reason why your application is one of the few I have answered is that I liked the frank way in which you expressed yourself. Can you sing?”

“Sing?” I exclaimed, startled at the unexpected question.

“Well, yes, I do sing occasionally,” I said. “That is to say, I used to at the sing-songs in France at sergeants’ messes, and so on. But perhaps you mightn’t consider it singing if you heard me,” I ended lightly.

“Very good, very good,” he observed absent-mindedly. “And you can drive a Rolls?”

Suddenly he focused his gaze upon me, and his keen, penetrating gray eyes seemed to pierce into my soul and read my inmost thoughts. For perhaps half a minute he remained looking at me like that, then suddenly he said shortly:

“You are engaged, Mr. Hargreave. Your salary will be six hundred pounds a year, paid monthly in advance, in addition to your living and incidental expenses. I leave for Yorkshire by the midday train from King’s Cross to-morrow, and you will come with me....