The Golden Chersonese and the Way Thither 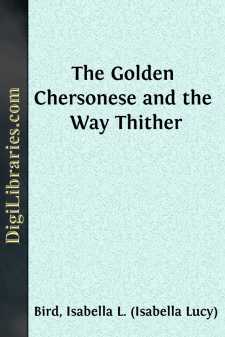 These Klings are active and industrious, but they lack fibre apparently, and that quick-sightedness for opportunities which makes the Chinese the most successful of all emigrants. Not a Malay or a Kling has raised himself either as a merchant or in any other capacity to wealth or distinction in the colony. The Klings make splendid boatmen, they drive gharries, run as syces, lend small sums of money at usurious interest, sell fruit, keep small shops, carry "chit books," and make themselves as generally useful as their mediocre abilities allow. They are said to be a harmless people so far as deeds go. They neither fight, organize, nor get into police rows, but they quarrel loudly and vociferously, and their vocabulary of abuse is said to be inexhaustible. The Kling men are very fine-looking, lithe and active, and, as they clothe but little, their forms are seen to great advantage. The women are, I think, beautiful—not so much in face as in form and carriage. I am never weary of watching and admiring their inimitable grace of movement. Their faces are oval, their foreheads low, their eyes dark and liquid, their noses shapely, but disfigured by the universal adoption of jewelled nose-rings; their lips full, but not thick or coarse; their heads small, and exquisitely set on long, slender throats; their ears small, but much dragged out of shape by the wearing of two or three hoop-earrings in each; and their glossy, wavy, black hair, which grows classically low on the forehead, is gathered into a Grecian knot at the back. Their clothing, or rather drapery, is a mystery, for it covers and drapes perfectly, yet has no make, far less fit, and leaves every graceful movement unimpeded. It seems to consist of ten wide yards of soft white muslin or soft red material, so ingeniously disposed as to drape the bust and lower limbs, and form a girdle at the same time. One shoulder and arm are usually left bare. The part which may be called a petticoat—though the word is a slur upon the graceful drapery—is short, and shows the finely turned ankles, high insteps, and small feet. These women are tall, and straight as arrows; their limbs are long and rounded; their appearance is timid, one might almost say modest, and their walk is the poetry of movement. A tall, graceful Kling woman, draped as I have described, gliding along the pavement, her statuesque figure the perfection of graceful ease, a dark pitcher on her head, just touched by the beautiful hand, showing the finely moulded arm, is a beautiful object, classical in form, exquisite in movement, and artistic in coloring, a creation of the tropic sun. What thinks she, I wonder, if she thinks at all, of the pale European, paler for want of exercise and engrossing occupation, who steps out of her carriage in front of her, an ungraceful heap of poufs and frills, tottering painfully on high heels, in tight boots, her figure distorted into the shape of a Japanese sake bottle, every movement a struggle or a jerk, the clothing utterly unsuited to this or any climate, impeding motion, and affecting health, comfort, and beauty alike?

It is all fascinating. Here is none of the indolence and apathy which one associates with Oriental life, and which I have seen in Polynesia. These yellow, brown, tawny, swarthy, olive-tinted men are all intent on gain; busy, industrious, frugal, striving, and, no matter what their creed is, all paying homage to Daikoku. In spite of the activity, rapidity, and earnestness, the movements of all but the Chinese are graceful, gliding, stealthy, the swarthy faces have no expression that I can read, and the dark, liquid eyes are no more intelligible to me than the eyes of oxen. It is the "Asian mystery" all over.

It is only the European part of Singapore which is dull and sleepy looking. No life and movement congregate round the shops. The merchants, hidden away behind jalousies in their offices, or dashing down the streets in covered buggies, make but a poor show. Their houses are mostly pale, roomy, detached bungalows, almost altogether hidden by the bountiful vegetation of the climate. In these their wives, growing paler every week, lead half-expiring lives, kept alive by the efforts of ubiquitous "punkah-wallahs;" writing for the mail, the one active occupation. At a given hour they emerge, and drive in given directions, specially round the esplanade, where for two hours at a time a double row of handsome and showy equipages moves continuously in opposite directions. The number of carriages and the style of dress of their occupants are surprising, and yet people say that large fortunes are not made now-a-days in Singapore! Besides the daily drive, the ladies, the officers, and any men who may be described as of "no occupation," divert themselves with kettle-drums, dances, lawn tennis, and various other devices for killing time, and this with the mercury at 80 degrees! Just now the Maharajah of Johore, sovereign of a small state on the nearest part of the mainland, a man much petted and decorated by the British Government for unswerving fidelity to British interests, has a house here, and his receptions and dinner parties vary the monotonous round of gayeties.

The native streets monopolize the picturesqueness of Singapore with their bizarre crowds, but more interesting still are the bazaars or continuous rows of open shops which create for themselves a perpetual twilight by hanging tatties or other screens outside the sidewalks, forming long shady alleys, in which crowds of buyers and sellers chaffer over their goods, the Chinese shopkeepers asking a little more than they mean to take, and the Klings always asking double. The bustle and noise of this quarter are considerable, and the vociferation mingles with the ringing of bells and the rapid beating of drums and tom-toms—an intensely heathenish sound. And heathenish this great city is. Chinese joss-houses, Hindu temples, and Mohammedan mosques almost jostle each other, and the indescribable clamor of the temples and the din of the joss-houses are faintly pierced by the shrill cry from the minarets calling the faithful to prayer, and proclaiming the divine unity and the mission of Mahomet in one breath....