The Golden Censer The duties of to-day, the hopes of the future 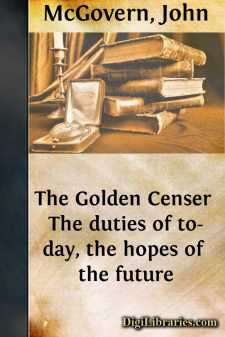 Then methought the air grew denser, perfumed from an unseen censer,Swung by seraphim whose foot-falls tinkled on the tufted floor. —Edgar Poe.

golden censer swings in the Temple of Life, making holy its halls and grateful its corridors. This fountain of our well-being is Duty. There is little true pleasure in the world which does not flow, either directly or remotely, from its depths.

It shall be the object of this volume to point out and name a few of the balms which burn in this Unseen Censer—a few of the lines of action which render our memories sweet and forever pleasant if they be wrapt in such perfume.

THE PALACE OF THE SOUL.

When the incense of a man's good actions spreads through the palace of the soul, "the powers that wait on noble deeds" light up the edifice with radiance brought from other worlds. In the eye of a good man—in the window of the palace of his soul—we behold an occupant who fears no duty. We are fascinated, and gather about, anxious to peer in upon the fortunate possessor. Therein lies the happiness and the force of good example.

But let the Censer burn low, and flicker in final sickliness; the great bell called Conscience, hanging in the dome, strikes an alarm that rocks the building. How oft the solemn tocsin sounds! It drives us to our duty! Let us be thankful its clangor is so harsh!

THE FATHER OF HIS COUNTRY,

the man whose heart was torn each time his soldiers' feet did bleed—the man who stood like a rock between the despot and the down-trodden—that man, at the end of the career which glorified him, and which, with reflected glory will light the annals of all coming centuries—that kind, good man, George Washington, could not discern the separating line between Duty and human happiness. "The consideration that human happiness and moral duty," he said, "are inseparately connected, will always continue to prompt me to promote the progress of the one by inculcating the practice of the other."

with the frankincense of our highest endeavors. "Let us," as Theodore Parker once said, "do our duty in our shop, or our kitchen, the market, the street, the office, the school, the home, just as faithfully as if we stood in the front rank of some great battle, and we knew that victory for mankind depended on our bravery, strength, and skill. When we do that, the humblest of us will be serving in that great army which achieves the welfare of the world."

THE SOLDIER GOES FORTH

with his loins girded, hoping to conquer in the hard battles of life. Let the incense of Duty cling to his garments and keep him clean from selfish contagion. How lovely the picture of that old man of Goldsmith's time, swinging the Golden Censer before the hearts that throbbed in unison with him:

He watched and wept, he prayed and felt for all;And as a bird each fond endearment tries,

To tempt her new-fledged offspring to the skies,He tried each art, reproved each dull delay,Allured to brighter worlds, and led the way.

Our duty was created with us. It is a pleasure to live....