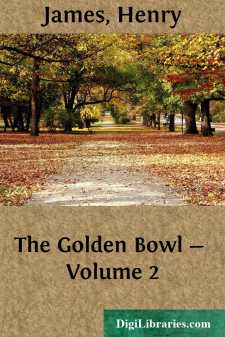 "Oh, 'the worst'—don't talk about the worst! I can keep them quiet at the best, I seem to feel, simply by our being there. It will work, from week to week, of itself. You'll see."

He was willing enough to see, but he desired to provide—! "Yet if it doesn't work?"

"Ah, that's talking about the worst!"

Well, it might be; but what were they doing, from morning to night, at this crisis, but talk? "Who'll keep the others?"

"Who'll keep THEM quiet? If your couple have had a life together, they can't have had it completely without witnesses, without the help of persons, however few, who must have some knowledge, some idea about them. They've had to meet, secretly, protectedly, they've had to arrange; for if they haven't met, and haven't arranged, and haven't thereby, in some quarter or other, had to give themselves away, why are we piling it up so? Therefore if there's evidence, up and down London—"

"There must be people in possession of it? Ah, it isn't all," she always remembered, "up and down London. Some of it must connect them—I mean," she musingly added, "it naturally WOULD—with other places; with who knows what strange adventures, opportunities, dissimulations? But whatever there may have been, it will also all have been buried on the spot. Oh, they've known HOW—too beautifully! But nothing, all the same, is likely to find its way to Maggie of itself."

"Because every one who may have anything to tell, you hold, will have been so squared?" And then inveterately, before she could say—he enjoyed so much coming to this: "What will have squared Lady Castledean?"

"The consciousness"—she had never lost her promptness—"of having no stones to throw at any one else's windows. She has enough to do to guard her own glass. That was what she was doing," Fanny said, "that last morning at Matcham when all of us went off and she kept the Prince and Charlotte over. She helped them simply that she might herself be helped—if it wasn't perhaps, rather, with her ridiculous Mr. Blint, that HE might be. They put in together, therefore, of course, that day; they got it clear—and quite under her eyes; inasmuch as they didn't become traceable again, as we know, till late in the evening." On this historic circumstance Mrs. Assingham was always ready afresh to brood; but she was no less ready, after her brooding, devoutly to add "Only we know nothing whatever else—for which all our stars be thanked!"

The Colonel's gratitude was apt to be less marked. "What did they do for themselves, all the same, from the moment they got that free hand to the moment (long after dinner-time, haven't you told me?) of their turning up at their respective homes?"

"Well, it's none of your business!"

"I don't speak of it as mine, but it's only too much theirs. People are always traceable, in England, when tracings are required. Something, sooner or later, happens; somebody, sooner or later, breaks the holy calm. Murder will out."