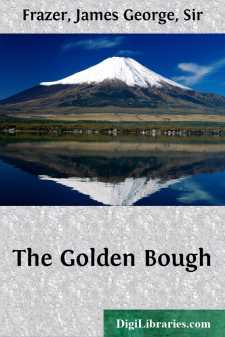 THE PRIMARY aim of this book is to explain the remarkable rule which regulated the succession to the priesthood of Diana at Aricia. When I first set myself to solve the problem more than thirty years ago, I thought that the solution could be propounded very briefly, but I soon found that to render it probable or even intelligible it was necessary to discuss certain more general questions, some of which had hardly been broached before. In successive editions the discussion of these and kindred topics has occupied more and more space, the enquiry has branched out in more and more directions, until the two volumes of the original work have expanded into twelve. Meantime a wish has often been expressed that the book should be issued in a more compendious form. This abridgment is an attempt to meet the wish and thereby to bring the work within the range of a wider circle of readers. While the bulk of the book has been greatly reduced, I have endeavoured to retain its leading principles, together with an amount of evidence sufficient to illustrate them clearly. The language of the original has also for the most part been preserved, though here and there the exposition has been somewhat condensed. In order to keep as much of the text as possible I have sacrificed all the notes, and with them all exact references to my authorities. Readers who desire to ascertain the source of any particular statement must therefore consult the larger work, which is fully documented and provided with a complete bibliography.

In the abridgment I have neither added new matter nor altered the views expressed in the last edition; for the evidence which has come to my knowledge in the meantime has on the whole served either to confirm my former conclusions or to furnish fresh illustrations of old principles. Thus, for example, on the crucial question of the practice of putting kings to death either at the end of a fixed period or whenever their health and strength began to fail, the body of evidence which points to the wide prevalence of such a custom has been considerably augmented in the interval. A striking instance of a limited monarchy of this sort is furnished by the powerful mediaeval kingdom of the Khazars in Southern Russia, where the kings were liable to be put to death either on the expiry of a set term or whenever some public calamity, such as drought, dearth, or defeat in war, seemed to indicate a failure of their natural powers. The evidence for the systematic killing of the Khazar kings, drawn from the accounts of old Arab travellers, has been collected by me elsewhere. Africa, again, has supplied several fresh examples of a similar practice of regicide. Among them the most notable perhaps is the custom formerly observed in Bunyoro of choosing every year from a particular clan a mock king, who was supposed to incarnate the late king, cohabited with his widows at his temple-tomb, and after reigning for a week was strangled. The custom presents a close parallel to the ancient Babylonian festival of the Sacaea, at which a mock king was dressed in the royal robes, allowed to enjoy the real king’s concubines, and after reigning for five days was stripped, scourged, and put to death. That festival in its turn has lately received fresh light from certain Assyrian inscriptions, which seem to confirm the interpretation which I formerly gave of the festival as a New Year celebration and the parent of the Jewish festival of Purim. Other recently discovered parallels to the priestly kings of Aricia are African priests and kings who used to be put to death at the end of seven or of two years, after being liable in the interval to be attacked and killed by a strong man, who thereupon succeeded to the priesthood or the kingdom.

With these and other instances of like customs before us it is no longer possible to regard the rule of succession to the priesthood of Diana at Aricia as exceptional; it clearly exemplifies a widespread institution, of which the most numerous and the most similar cases have thus far been found in Africa....