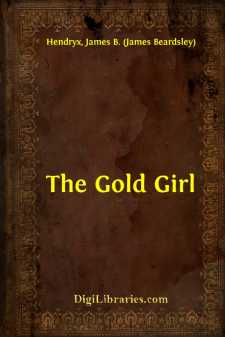 CHAPTER I A HORSEMAN OF THE HILLS

Patty Sinclair reined in her horse at the top of a low divide and gazed helplessly around her. The trail that had grown fainter and fainter with its ascent of the creek bed disappeared entirely at the slope of loose rock and bunch grass that slanted steeply to the divide. In vain she scanned the deeply gored valley that lay before her and the timbered slopes of the mountains for sign of human habitation. Her horse lowered his head and snipped at the bunch grass. Stiffly the girl dismounted. She had been in the saddle since early noon with only two short intervals of rest when she had stopped to drink and to bathe her fare in the deliciously cold waters of mountain streams—and now the trail had melted into the hills, and the broad shadows of mountains were lengthening. Every muscle of her body ached at the unaccustomed strain, and she was very hungry. She envied her horse his enjoyment of the bunch grass which he munched with much tongueing of the bit and impatient shaking of the head. With bridle reins gripped tightly she leaned wearily against the saddle.

"I'm lost," she murmured. "Just plain lost. Surely I must have come fifty miles, and I followed their directions exactly, and now I'm tired, and stiff, and sore, and hungry, and lost." A grim little smile tightened the corners of her mouth. "But I'm glad I came. If Aunt Rebecca could see me now! Wouldn't she just gloat? 'I told you so, my dear, just as I often told your poor father, to have nothing whatever to do with that horrible country of wild Indians, and ferocious beasts, and desperate characters.'" Hot tears blurred her eyes at the thought of her father. "This is the country he loved, with its mountains and its woods and its deep mysterious valleys—and I want to love it, too. And I will love it! I'll find his mine if it takes me all the rest of my life. And I'll show the people back home that he was right, that he did know that the gold was here, and that he wasn't just a visionary and a ne'er-do-well!"

A rattle of loose stones set her heart thumping wildly and caused her to peer down the back trail where a horseman was slowly ascending the slope. The man sat loosely in his saddle with the easy grace of the slack rein rider. A roll-brim Stetson with its crown boxed into a peak was pushed slightly back upon his head, and his legs were encased to the thighs in battered leather chaps whose lacings were studded with silver chonchas as large as trade dollars. A coiled rope hung from a strap upon the right side of his saddle, while a leather-covered jug was swung upon the opposite side by a thong looped over the horn. All this the girl took in at a glance as the rangy buckskin picked his way easily up the slope. She noted, also, the white butt-plates of the revolver that protruded from its leather holster. Her first impulse was to mount and fly, but the futility of the attempt was apparent. If the man followed she could hardly hope to elude him upon a horse that was far from fresh, and even if she did it would be only to plunge deeper into the hills—become more hopelessly lost. Aunt Rebecca's words "desperate character" seemed suddenly to assume significance. The man was very close now. She could distinctly hear the breathing of his horse, and the soft rattle of bit-chains. Despite her defiant declaration that she was glad she had come, she knew that deep down in her heart, she fervidly wished herself elsewhere. "Maybe he's a ranchman," she thought, "but why should any honest man be threading unfrequented hill trails armed with a revolver and a brown leather jug?" No answer suggested itself, and summoning her haughtiest, coldest look, she met the glance of the man who drew rein beside her. His features were clean-cut, bronzed, and lean—with the sinewy leanness of health....