The Gnosis of the Light 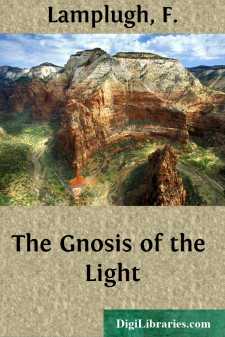 This translation of the ancient Gnôstic work, called by Schmidt, the Untitled Apocalypse, is based chiefly on Amélineau's French version of the superior MS. of the Codex Brucianus, now in the Bodleian Library, Oxford. In making the rendering I have studied the context carefully, and have not neglected the Greek words interspersed with the Coptic; also I have availed myself of Mr Mead's translation of certain important passages from Schmidt's edition, for purposes of comparison. Anything that I have added to bring out the meaning of the Gnôstic author now and again, I have enclosed in brackets. Such suggestions have always arisen from the text. I fancy my English version will be found to give a reasonably accurate idea of the contents of one of the most abstruse symbolical works in the world. The notes that I have added are not intended to be final or exhaustive, but to give the general reader some guidance towards understanding the intensely interesting topics with which the powerful mind of the ancient mystical writer was preoccupied. I have endeavoured to show myself a sympathetic "Hierophant" or expounder of some of the mysteries, not without study of the Gnôsis, both of the Christianised and purely Hellenistic type, for the key to the understanding of symbolism is only given into the hands of sympathy.

The Codex Brucianus was brought to England from Upper Egypt, by the famous traveller Bruce, in 1769, and bequeathed by him to the care of the Bodleian Library, Oxford. It contains several Gnôstic works translated into the Upper Egyptian dialect from the Greek, and probably is as old as the sixth century A.D. The Greek originals were of course much older, that is to say, the MSS. to which the codex ultimately goes back were much older. We are only concerned with one of them here, the so-called Untitled Apocalypse, which is markedly distinct from the others in character and style. Schmidt dates it well in the second century A.D., and with this estimate I am inclined to agree. It shows, as I have endeavoured to make clear in the notes, marked affinities in some respects to the Gospel of Mary (Codex Akhmim), which we know to have been in existence before 180 A.D., and its philosophical basis is the Platonism of Alexandria. If it is by one writer, I think it may be dated from 160 or 170 A.D.-200 A.D., and belongs to the period of Basilides and Valentinus.

Before venturing upon any discussion of the authorship and contents of our document, it would be as well to say a few words as to the meaning of that much misunderstood technical term "Gnôsis" in Hellenistic and early Christian theology. For a fuller exposition I would refer the reader to the admirable essay upon the subject by Mr G. R. S. Mead in his volume Quests Old and New. Gnôsis was not "philosophy" in the generally accepted sense of the term, or even religio-philosophy. "It was immediate knowledge of God's mysteries received from direct intercourse with the Deity—mysteries which must remain hidden from the natural man, a knowledge at the same time which exercises decided reaction on our relationship to God and also on our nature or disposition" (Reitzenstein). It was the power or gift of receiving and understanding revelation, which finally culminated in the direct unveiled vision of God and the transformation of the whole man into spiritual being by contact with Him. The ground of the idea of Gnôsis does not seem to be very different from that of the later "Mystical Theology," "which originally meant the direct, secret, and incommunicable knowledge of God received in contemplation" (Dom John Chapman). The revelation sought for was not so much a dogmatic revelation as a revelation of the processes of "transmutation" of Rebirth, of Apotheosis or "Deification." Its aim was dynamic rather than static. But while the followers of the Gnôsis, both Christian and Hellenistic, would have agreed that the direct knowledge of God is incommunicable to others, they undoubtedly seem to have held that there were what may be described as intermediate or preparatory processes or energisings which could be communicated: (1) by initiation into a holy community; (2) by a duly qualified master; (3) under the veils of symbols and sacraments.

The Gnôstic movement began long before the Christian era (what its original historical impulse was we do not know), and only one aspect of it, and that from a strictly limited point of view, has been treated by ecclesiastical historians....