The Glow-Worm and Other Beetles 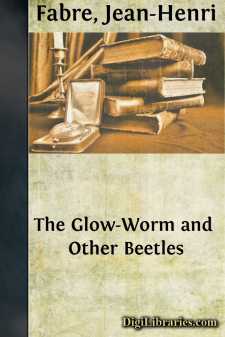 CHAPTER I THE GLOW-WORM

Few insects in our climes vie in popular fame with the Glow-worm, that curious little animal which, to celebrate the little joys of life, kindles a beacon at its tail-end. Who does not know it, at least by name? Who has not seen it roam amid the grass, like a spark fallen from the moon at its full? The Greeks of old called it [Greek: lampouris], meaning, the bright-tailed. Science employs the same term: it calls the lantern-bearer, Lampyris noctiluca, LIN. In this case, the common name is inferior to the scientific phrase, which, when translated, becomes both expressive and accurate.

In fact, we might easily cavil at the word "worm." The Lampyris is not a worm at all, not even in general appearance. He has six short legs, which he well knows how to use; he is a gad-about, a trot-about. In the adult state, the male is correctly garbed in wing-cases, like the true Beetle that he is. The female is an ill-favoured thing who knows naught of the delights of flying: all her life long, she retains the larval shape, which, for the rest, is similar to that of the male, who himself is imperfect so long as he has not achieved the maturity that comes with pairing-time. Even in this initial stage, the word "worm" is out of place. We French have the expression "Naked as a worm," to point to the lack of any defensive covering. Now the Lampyris is clothed, that is to say, he wears an epidermis of some consistency; moreover, he is rather richly coloured: his body is dark brown all over, set off with pale pink on the thorax, especially on the lower surface. Finally, each segment is decked at the hinder edge with two spots of a fairly bright red. A costume like this was never worn by a worm.

Let us leave this ill-chosen denomination and ask ourselves what the Lampyris feeds upon. That master of the art of gastronomy, Brillat-Savarin,1 said:

"Show me what you eat and I will tell you what you are."

A similar question should be addressed, by way of a preliminary, to every insect whose habits we propose to study, for, from the least to the greatest in the zoological progression, the stomach sways the world; the data supplied by food are the chief of all the documents of life. Well, in spite of his innocent appearance, the Lampyris is an eater of flesh, a hunter of game; and he follows his calling with rare villainy. His regular prey is the Snail.

This detail has long been known to entomologists. What is not so well-known, what is not known at all yet, to judge by what I have read, is the curious method of attack, of which I have seen no other instance anywhere.

Before he begins to feast, the Glow-worm administers an anæsthetic: he chloroforms his victim, rivalling in the process the wonders of our modern surgery, which renders the patient insensible before operating on him. The usual game is a small Snail hardly the size of a cherry, such as, for instance, Helix variabilis, DRAP., who, in the hot weather, collects in clusters on the stiff stubble and on other long, dry stalks, by the roadside, and there remains motionless, in profound meditation, throughout the scorching summer days....