The Girl Scouts Their History and Practice

by Girl Scouts of the United States of America 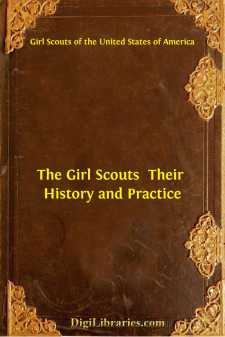 History of the American Girl Scouts. When Sir Robert Baden-Powell founded the Boy Scout movement in England, it proved too attractive and too well adapted to youth to make it possible to limit its great opportunities to boys alone. The Sister organization, known in England as the Girl Guides, quickly followed it and won equal success.

Mrs. Juliette Low, an American visitor in England, and a personal friend of the father of Scouting, realized the tremendous future of the movement for her country; and with the active and friendly co-operation of the Baden-Powells, she founded the Girl Guides in America, enrolling the first patrols in Savannah, Georgia, in March, 1912.

In 1913 National Headquarters were established in Washington, D.C., and the name changed to Girl Scouts.

In 1915 the organization was incorporated with the legal title, Girl Scouts, Incorporated.

In 1916 National Headquarters were moved to New York and the methods and standards of what was plainly to be a nation-wide organization became established on a broad, practical basis.

The first National Convention was held in 1915, and each succeeding year has shown a larger and more enthusiastic body of delegates and a public more and more interested in this steadily growing army of girls and young women who are learning in the happiest way to combine patriotism, outdoor activities of every kind, skill in every branch of domestic science and high standards of community service.

Every side of the girl's nature is brought out and developed by enthusiastic captains, who join in the games and various forms of training and encourage team work and fair play. For the instruction of the captains, national camps and training schools are being established all over the country; and the schools and churches everywhere are co-operating eagerly with this great recreational movement, which they realize adds something to the life of the growing girl that they have been unable to supply.

Colleges are offering fellowships in scouting as a serious course for would-be captains, and prominent citizens in every part of the country are identifying themselves with local councils in an advisory and helpful capacity. At the present writing, nearly 60,000 girls and more than 3,000 captains represent the original little troop in Savannah—surely a satisfying sight for our Founder and National President, when she realizes what a healthy sprig she has transplanted from the Mother Country!

Aims. While the aims of Scouting are similar to those of the schools, the church and the home, its methods are less direct and success depends upon the attraction which the program has for the girls. Belonging to an organization, the uniform, such novel activities as knot-tying, hiking, signalling and drilling, the chance for leadership, the laws to which they voluntarily subscribe and the recognition of ability by the system of giving badges are the distinctive elements of Scouting. They succeed in bringing about improved health, approved standards of behavior towards others, a general arousing of the imagination as well as practical knowledge....