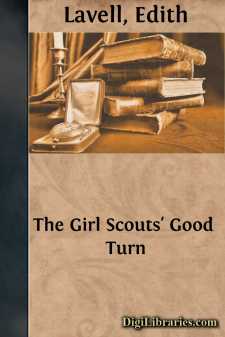 CHAPTER I THE RECEPTION "And it's somewhere there in fairyland—— It's where the rainbow ends!"

Marjorie Wilkinson hummed softly to herself as she skipped from place to place, adding the finishing touches to the effect she and her committee had planned.

It was the first Saturday of the regular fall term at Miss Allen's Boarding School. The girls were back again in their old places—all except the seniors of the previous year, who had graduated—and now the sophomores were preparing for the first social event of the year, their reception to the freshmen. Marjorie Wilkinson was chairman.

The clock struck seven, and she stood perfectly still in the center of the floor, viewing the result of their work. The bare, ugly gymnasium had disappeared; in its place was a little winter scene from fairyland. Cedar branches, decked with flakes of artificial snow, and great white snowbanks, completely hid the walls from view. Spread over the floor, except for a space in the middle reserved for dancing, were pine needles and more patches of snow; and everywhere frosty tinsel glimmered in the soft, blue light of the covered electric bulbs.

The girls walked lightly and spoke softly, as if they feared that by some rude noise they might break the magic spell of the scene.

Marjorie, wearing her first real party dress—a pale blue georgette, with a silver sash, and a narrow silver band about her forehead, seemed in perfect harmony with the blue and silver of the scene. But, standing gracefully erect, with one satin-slippered foot extended in front of the other, and her head thrown back as she contemplated the effect, she did not think of the impression she was making. It was not until Lily Andrews, her room-mate, drew her attention to her costume that she thought of herself.

"Your dress is just lovely with the rest of the effect," she said, putting her arm affectionately through Marjorie's.

"Thanks, Lil," replied the other girl carelessly. "Isn't the room wonderful? I think it's the prettiest scene, off the stage, that I ever saw!"

"It's lovely. They certainly can't help liking it, can they?"

"Poor freshies!" sighed Marjorie, with the infinite wisdom of the sophomore. "Remember how green we were?"

"Indeed, I do—and that first reception, when they still had the sorority! Didn't we just think Frances Wright and Ethel Todd were nothing short of goddesses? I wonder whether these freshmen know about our Girl Scout troop, and are as eager to make it as we were the sorority!"

But before Lily could reply, the orchestra, three players who came from the city, entered the room, and Marjorie hurried over to give them the final directions. When she turned around again, Lily had vanished; but near her stood Ruth Henry, her old friend from her home town, who had played the part of jealous rival ever since the girls had been at Miss Allen's.

"Hello, Marj!" She greeted her with the old familiarity; indeed, the girls were good friends now, in spite of all that had happened the previous year. "Your dress is sweet," she added.

Ruth sat down on a chair near-by, and beckoned Marjorie to sit beside her.

"The freshies aren't here yet," she remarked. "We might as well rest. I want to ask you something."

Marjorie complied with her request as far as her physical presence was concerned. But her eyes wandered from one place to another over the room, reviewing the effect, and her mind was drifting from what Ruth was saying. But the latter hardly noticed her preoccupation, so intent was she upon her own interests.

"Listen, Marj!" She reduced her voice to an intimate tone. "Have you thought about our class president?"

"Yes—not Doris Sands—of course, she is still president; but what I mean is—our next president!"