The Girl Scouts at Sea Crest Or, the Wig Wag Rescue 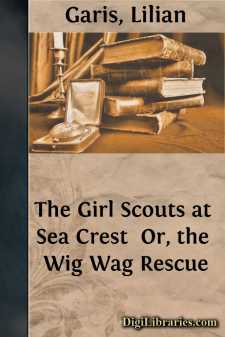 CHAPTER I SAME OLD OCEAN THREE girls stood on the beach watching the waves—the tireless, endless, continuous toss, break, splash; toss, break, splash! Always the same climbing combers smoothly traveling in from eternity, mounting their hills to the playful height of liquid summits, then rolling down in an ocean of foam, to splash on the beach into the most alluring of earth's play toys—the breakers.

"And we thought the baby mountain at Bellaire beautiful—why this ocean is—well, it is simply bigger and grander than anything I have ever dreamed of," declared Grace. "No wonder the girls out in Chicago long to spend a summer at the sea shore."

"I couldn't even find a word to describe it," admitted Cleo. "Doesn't it look like eternity all spilled out?"

"And the roll is like the origin of noise," suggested Grace. "Now, Weasie, what do you see that looks like—like the original public service telephone company, or the first gas and electric plant? Don't you think those glints of color and sparks of foam may be our first sulphur springs?"

"I never could claim a poetic imagination," admitted Louise, known to her chums as Weasie, "but I might see a family resemblance there to—well—to a first-class Turkish bath. There! How the mighty hath fallen! From the origin of noise and eternity spilled out, down to a mundane yet highly desirable Turkish bath! And girls, mine is the only practical description, for a bath it is to be, ours for all summer! Can you imagine it?"

"And smell the salt?" prompted Cleo. "Since you insist on being practical, no use talking about the aroma of the gods, or the incense of the mermaids. Weasie, I see you are going to keep us down to earth; and I guess you are right. Essays are better in school than done orally on a beautiful beach. But really isn't it overwhelming?"

"I'll admit that much," replied Weasie. "But you see, I have had a glimpse of the beach before. I vacationed here for one week. Then I have been to Atlantic City in winter. That's simply wonderful. But you little Westerners, all the way from Pennsylvania," and she laughed at the idea, "you, of course, have only seen good old Lake Erie. Yes, girls, this is the ocean. Meet Madame Atlantic," with a sweeping gesture toward the ocean. "But look out! That's how Madame Atlantic meets us! Just look at my pumps!"

A vengeful wave had crept in and deliberately splashed the three pairs of new summer pumps, before the girls realized they were being surrounded.

"Well, of all things!" exclaimed Grace. "How did that wave get in without us seeing it? And we standing right there watching it! My shoes are simply done for," and she looked about for a place to sit down and dump out some of the damage.

"That's the way with waves," explained Louise, who now stood sponsor for the ocean and its habits. "You never can tell just what a wave will do."

"I see," said Cleo, trying to plough through the heavy sand without burying the soaking wet slippers. "I suppose we may call this our initiation. Changing time at Pittsburg is nothing to changing pumps at Sea Crest....