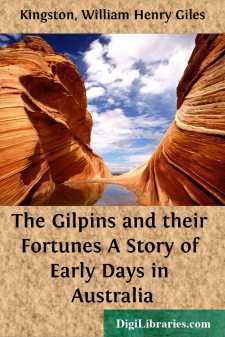 Arthur Gilpin and Mark Withers walked down the High Street, arm-in-arm, on their return to their respective homes from the well-managed school of Wallington.

They were among the head boys, and were on the point of leaving it to enter on the work of active life, and make their way in the world. They had often of late discussed the important question—all-important, as it seemed to them— “How are we to make our way—to gain wealth, influence, our hearts’ desires?”

“For my part, I cannot stand a plodding style of doing things,” said Mark. “It is all very well for those without brains, but a fellow who has a grain of sense in his head requires a more rapid way of making a fortune. Life is too short to be wasted in getting money. I want to have it to spend while I am young and can enjoy it.”

Arthur was silent for some time. At length he remarked, “It strikes me, Mark, that the object of making money is that we may support ourselves and families, and help those who are in distress. My father often says to James, and to me, and to the rest of us, ‘I don’t want you, when you enter business, to be thinking only how you can make money. Do your duty, and act liberally towards all men, and you will have a sufficiency at all events, if not wealth.’”

“Oh! your father’s old-fashioned notions won’t do in the world, and certainly won’t suit me, that I can tell you,” answered Mark, in a scornful tone.

“My father is considered a sensible man. What he preaches he practises; and though he has a very large family, no one calls him a poor man,” argued Arthur. “He says that, considering how short life is, it cannot be wise to spend the time, as many men do, in gathering up riches and setting so high a value on them. But here comes James! Let us hear what he has to say on the subject.”

“Oh! of course, James has got the same notions from your father that you have, and I am not going to be influenced by him,” answered Withers.

James, however, was appealed to, and answered, “Even if we were to live for ever in this world, I should agree with Arthur; for, from all I see and hear, I am convinced that wealth cannot secure happiness; but as this world is only a place of preparation for another, it is evident folly to set one’s heart upon what must be so soon parted with.”

Withers made a gesture of impatience, exclaiming, “Come, come, I won’t stand any preaching, you know that; but we are old friends, and so I don’t want to quarrel about trifles, when we are so soon to separate! You stick to your opinion, I will stick to mine, and we’ll see who is right at last.”

“If this matter were a trifle I would not press it, but, because I am sure that it is one of great importance, I do press it upon you most earnestly, though, believe me, I am sorry to annoy you,” said Arthur Gilpin.

“Oh! I dare say you mean well,” answered Withers, in a contemptuous tone. “But don’t bother me again on the subject, there’s a good fellow....