The Ghost Breaker A Melodramatic Farce in Four Acts 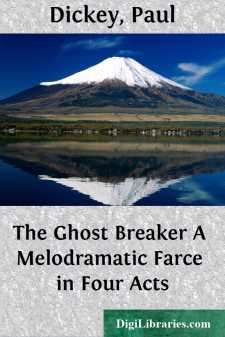 Vardos, Messenger to the Missing Prince.

Don Robledo, a Soldier of Fortune.

Act I. A Room in the Hotel Manhattan, New York. Five A.M.

Act II. A Cabin on Board S.S. Aquitania. Same Morning.

The Ghost Breaker ACT I

Princess. Madre de Dios! (Showing only her head.) (Jarvis kicks in door, shuts it, and throws his shoulder against it.) Who's there?

Princess. (Winding her dressing gown closely about her and coming a little way into the room) What do you want?

Princess. (Switches on lamp on right table) How dare you enter!

Jarvis. Sh! Not a sound—do you understand?

Voice. Where'd he go? Look on the fire-escape.

Second Voice. No, he's on this floor.

Princess. What is it? What do you want here? What have you done?

Jarvis. (Turning to her) Now, it's all right. I'm not going to harm you. If you will just keep quiet. Is that clear to you?

Princess. Is it money you want? All the money I have is on that dressing table. (Pointing.) Take it and go.

Jarvis. I'm not a burglar. I don't want your money.

Princess. Well, then, what do you want? (Sound of running in corridor coming toward door r.)

Jarvis. Listen—— (Turns back to door.) They're coming here. (To Princess) They mustn't search this room, do you understand—you must put them off—I'm not what you think I am. (Running dies away. Jarvis turns to Princess.) Is there no way out through that door? (Indicates door 5r.)

Princess. That is my maid's room.

Jarvis. The fire-escape—where is it?

Princess. In the hall opposite.

Jarvis. I thought that red light meant in here. Hell! I beg your pardon.

Princess. Well, why don't you go?

Jarvis. I can't go that way. (Indicating door 6l.) They'll be waiting for me in the hall.

Princess. Well, what do you expect me to do?

Jarvis. The light fooled me. I thought that door led to the fire-escape.

Princess. You said that before.

Princess. Is the situation so amusing...?