The Germ Thoughts towards Nature in Poetry, Literature and Art 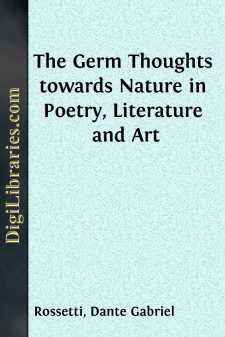 Of late years it has been my fate or my whim to write a good deal about the early days of the Præraphaelite movement, the members of the Præraphaelite Brotherhood, and especially my brother Dante Gabriel Rossetti, and my sister Christina Georgina Rossetti. I am now invited to write something further on the subject, with immediate reference to the Præraphaelite magazine “The Germ,” republished in this volume. I know of no particular reason why I should not do this, for certain it is that few people living know, or ever knew, so much as I do about “The Germ,”; and if some press-critics who regarded previous writings of mine as superfluous or ill-judged should entertain a like opinion now, in equal or increased measure, I willingly leave them to say so, while I pursue my own course none the less.

“The Germ” is here my direct theme, not the Præraphaelite Brotherhood; but it seems requisite to say in the first instance something about the Brotherhood—its members, allies, and ideas—so as to exhibit a raison d'être for the magazine. In doing this I must necessarily repeat some things which I have set forth before, and which, from the writings of others as well as myself, are well enough known to many. I can vary my form of expression, but cannot introduce much novelty into my statements of fact.

In 1848 the British School of Painting was in anything but a vital or a lively condition. One very great and incomparable genius, Turner, belonged to it. He was old and past his executive prime. There were some other highly able men—Etty and David Scott, then both very near their death; Maclise, Dyce, Cope, Mulready, Linnell, Poole, William Henry Hunt, Landseer, Leslie, Watts, Cox, J.F. Lewis, and some others. There were also some distinctly clever men, such as Ward, Frith, and Egg. Paton, Gilbert, Ford Madox Brown, Mark Anthony, had given sufficient indication of their powers, but were all in an early stage. On the whole the school had sunk very far below what it had been in the days of Hogarth, Reynolds, Gainsborough, and Blake, and its ordinary average had come to be something for which commonplace is a laudatory term, and imbecility a not excessive one.

There were in the late summer of 1848, in the Schools of the Royal Academy or barely emergent from them, four young men to whom this condition of the art seemed offensive, contemptible, and even scandalous. Their names were William Holman-Hunt, John Everett Millais, and Dante Gabriel Rossetti, painters, and Thomas Woolner, sculptor. Their ages varied from twenty-two to nineteen—Woolner being the eldest, and Millais the youngest. Being little more than lads, these young men were naturally not very deep in either the theory or the practice of art: but they had open eyes and minds, and could discern that some things were good and other bad—that some things they liked, and others they hated. They hated the lack of ideas in art, and the lack of character; the silliness and vacuity which belong to the one, the flimsiness and make-believe which result from the other....