The Gay Lord Quex A Comedy in Four Acts 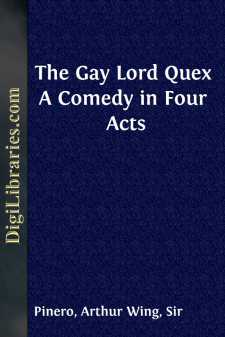 The scene represents a manicure establishment in New Bond Street. It is a front room upon the first floor, with three french-windows affording a view of certain buildings on the east side of the street. On the left, furthest from the spectator, is a wide, arched opening, apparently leading to another apartment, in which is the door giving entrance to the rooms from the staircase. Nearer, there is another french-window, opening on to an expanse of "leads" and showing the exterior of the wall of the further room above-mentioned. From the right, above the middle window, runs an ornamental partition, about nine feet in height, with panels of opaque glass. This partition extends more than half-way across the room, then runs forward for some distance, turns off at a sharp angle, and terminates between the arched opening and the window on the left. That part of the partition running from right to left is closed on its left side and forms, therefore, a separate room or compartment. Facing the audience, on the right, is a door admitting to this compartment; and, on the left, also in the, partition opposite the windows on the right, is an opening with a looped-back portière. The space between this opening and the further room forms a narrow anteroom, containing articles of furniture visible through the opening. Mirrors are affixed to the right wall, between the lower and the middle window and between the middle window and the partition, while on the left, between the window and the partition, is another mirror. A number of business cards are stuck in the frames of the mirrors. On the right, before each of the two lower windows, turned from the spectator, is a capacious arm-chair, made in cane open-work. Attached to the arms of these chairs are little screens—also made of cane—shielding in a measure the occupants of the chairs from observation. Upon both the right and left arms of these chairs are circular frames, in cane, shaped to receive bowls of water Above each of the screen-chairs stands a smaller chair, set to face the larger one; and beside the small chair, on its right hand, is a low table, upon which are arranged the instruments and toilet necessaries employed in the process of manicure On the right, between the window and the partition is a three-cornered what-not, on which are set out packets of soap and of powder and other articles of the toilet. At the further end of the room, in the centre, stands a desk laden with account-books; and above the desk, its back against the partition, is a chair. On the right is a hat-and-umbrella stand. Nearer, in the centre, is a large circular table on which are displayed bottles of scent and liquid soap, cases of instruments for manicure, and some wooden bowls of bath-soap with lather brushes. On the right and left are ordinary chairs. Placed against the partition on the left, and facing the audience, is a cabinet, making a display similar to that upon the what-not. Nearer, on the left, there is another screen-chair set to face the audience; below it is a smaller seat and, by the side of the smaller seat, another little table with manicure tools, &c. Some framed photographs of ladies hang against the wood-work of the partition and in the wall-spaces; and in the lower and middle windows, on the right, bird-cages are suspended.

The light is that of a bright day in June.

[On the right Miss Claridge and Miss Huddle are in the final stages of manicuring two smart-looking men. The men occupy the screen-chairs; the manicurists—comely girls in black frocks—sit, facing the men, upon the smaller seats. On the left Miss Moon is rougeing and varnishing the nails of a fashionably-dressed young lady, whose maid is seated at the table in the centre. Miss Limbird is at the desk, deep in accounts.

[To the young lady.] You won't have them too red, will you?

[Examining his nails critically as he rises.] I say though, that's a vast improvement!

Getting more shapely, aren't they?

[He pays Miss Limbird, stands talking to her for a while, and ultimately strolls away through the opening in the partition....