The Gaming Table: Its Votaries and Victims Volume I (of II) 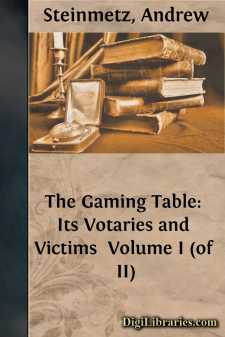 To the readers of the present generation much of this book will, doubtless, seem incredible. Still it is a book of facts—a section of our social history, which is, I think, worth writing, and deserving of meditation.

Forty or fifty years ago—that is, within the memory of many a living man—gambling was 'the rage' in England, especially in the metropolis. Streets now meaningless and dull—such as Osendon Street, and streets and squares now inhabited by the most respectable in the land—for instance, St James's Square, THEN opened doors to countless votaries of the fickle and capricious goddess of Fortune; in the rooms of which many a nobleman, many a gentleman, many an officer of the Army and Navy, clergymen, tradesmen, clerks, and apprentices, were 'cleaned out'—ruined, and driven to self-murder, or to crimes that led to the gallows. 'I have myself,' says a writer of the time, 'seen hanging in chains a man whom a short time before I saw at a Hazard table!'

History, as it is commonly written, does not sufficiently take cognizance of the social pursuits and practices that sap the vitality of a nation; and yet these are the leading influences in its destiny—making it what it is and will be, at least through many generations, by example and the inexorable laws that preside over what is called 'hereditary transmission.'

Have not the gambling propensities of our forefathers influenced the present generation?....

No doubt gambling, in the sense treated of in this book, has ceased in England. If there be here and there a Roulette or Rouge et Noir table in operation, its existence is now known only to a few 'sworn-brethren;' if gambling at cards 'prevails' in certain quarters, it is 'kept quiet.' The vice is not barefaced. It slinks and skulks away into corners and holes, like a poisoned rat. Therefore, public morality has triumphed, or, to use the card-phrase, 'trumped' over this dreadful abuse; and the law has done its duty, or has reason to expect congratulation for its success, in 'putting down' gaming houses.

But we gamble still. The gambling on the Turf (now the most uncertain of all 'games of chance') was, lately, something that rang through and startled the entire nation. We gamble in the funds. We gamble in endless companies (limited)—all resulting from the same passion of our nature, which led to the gambling of former times with cards, with dice, at Piquet, Basset, Faro, Hazard, E O, Roulette, and Rouge et Noir. At a recent memorable trial, the Lord Chief Justice of England exclaimed—'There can be no doubt—any one who looks around him cannot fail to perceive—that a spirit of speculation and gambling has taken hold of the minds of large classes of the population. Men who were wont to be satisfied with moderate gain and safe investments seem now to be animated by a spirit of greed after gain, which makes them ready to embark their fortunes, however hardly gained, in the vain hope of realizing immense returns by premiums upon shares, and of making more than safe and reasonable gains. We see that continually.' In fact, we may not be a jot better morally than our forefathers. But that is no reason why we should not frown over the story of their horrid sins, and, 'having a good conscience,' think what sad dogs they were in their generation—knowing, as we do, that none of us at the present day lose FIFTY OR A HUNDRED THOUSAND POUNDS at play, at a sitting, in one single night—as was certainly no very uncommon 'event' in those palmy days of gaming; and that we could not—as was done in 1820—produce a list of FIVE HUNDRED names (in London alone) of noblemen, gentlemen, officers of the Army and Navy, and clergymen, who were veteran or indefatigable gamesters, besides 'clerks, grocers, horse-dealers, linen-drapers, silk-mercers, masons, builders, timber-merchants, booksellers, &c., &c., and men of the very lowest walks of life,' who frequented the numerous gaming houses throughout the metropolis—to their ruin and that of their families more or less (as deploringly lamented by Captain Gronow), and not a few of them, no doubt, finding themselves in that position in which they could exclaim, at OUR remonstrance, as feelingly as did King Richard—