The Future of Islam 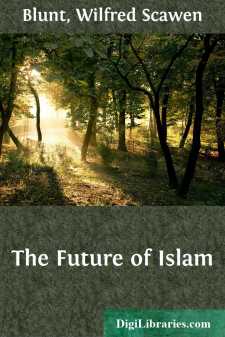 CHAPTER I. CENSUS OF THE MOHAMMEDAN WORLD. THE HAJ.

In the lull, which we hope is soon to break the storm of party strife in England, it may not perhaps be impossible to direct public attention to the rapid growth of questions which for the last few years have been agitating the religious mind of Asia, and which are certain before long to present themselves as a very serious perplexity to British statesmen; questions, moreover, which if not dealt with by them betimes, it will later be found out of their power to deal with at all, though a vigorous policy at the present moment might yet solve them to this country's very great advantage.

The revival which is taking place in the Mohammedan world is indeed worthy of every Englishman's attention, and it is difficult to believe that it has not received anxious consideration at the hands of those whose official responsibility lies chiefly in the direction of Asia; but I am not aware that it has hitherto been placed in its true light before the English public, or that a quite definite policy regarding it may be counted on as existing in the counsels of the present Cabinet. Indeed, as regards the Cabinet, the reverse may very well be the case. We know how suspicious English politicians are of policies which may be denounced by their enemies as speculative; and it is quite possible that the very magnitude of the problem to be solved in considering the future of Islam may have caused it to be put aside there as one "outside the sphere of practical politics." The phrase is a convenient one, and is much used by those in power amongst us who would evade the labour or the responsibility of great decisions. Yet that such a problem exists in a new and very serious form I do not hesitate to affirm, nor will my proposition, as I think, be doubted by any who have mingled much in the last few years with the Mussulman populations of Western Asia. There it is easily discernible that great changes are impending, changes perhaps analogous to those which Christendom underwent four hundred years ago, and that a new departure is urgently demanded of England if she would maintain even for a few years her position as the guide and arbiter of Asiatic progress.

It was not altogether without the design of gaining more accurate knowledge than I could find elsewhere on the subject of this Mohammedan revival that I visited Jeddah in the early part of the past winter, and that I subsequently spent some months in Egypt and Syria in the almost exclusive society of Mussulmans. Jeddah, I argued, the seaport of Mecca and only forty miles distant from that famous centre of the Moslem universe, would be the most convenient spot from which I could obtain such a bird's-eye view of Islam as I was in search of; and I imagined rightly that I should there find myself in an atmosphere less provincial than that of Cairo, or Bagdad, or Constantinople.

Jeddah is indeed in the pilgrim season the suburb of a great metropolis, and even a European stranger there feels that he is no longer in a world of little thoughts and local aspirations. On every side the politics he hears discussed are those of the great world, and the religion professed is that of a wider Islam than he has been accustomed to in Turkey or in India. There every race and language are represented, and every sect. Indians, Persians, Moors, are there,—negroes from the Niger, Malays from Java, Tartars from the Khanates, Arabs from the French Sahara, from Oman and Zanzibar, even, in Chinese dress and undistinguishable from other natives of the Celestial Empire, Mussulmans from the interior of China. As one meets these walking in the streets, one's view of Islam becomes suddenly enlarged, and one finds oneself exclaiming with Sir Thomas Browne, "Truly the (Mussulman) world is greater than that part of it geographers have described." The permanent population, too, of Jeddah is a microcosm of Islam....