The Future of Astronomy 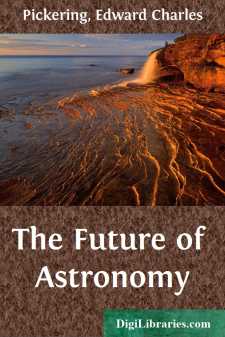 It is claimed by astronomers that their science is not only the oldest, but that it is the most highly developed of the sciences. Indeed it should be so, since no other science has ever received such support from royalty, from the state and from the private individual. However this may be, there is no doubt that in recent years astronomers have had granted to them greater opportunities for carrying on large pieces of work than have been entrusted to men in any other department of pure science. One might expect that the practical results of a science like physics would appeal to the man who has made a vast fortune through some of its applications. The telephone, the electric transmission of power, wireless telegraphy and the submarine cable are instances of immense financial returns derived from the most abstruse principles of physics. Yet there are scarcely any physical laboratories devoted to research, or endowed with independent funds for this object, except those supported by the government. The endowment of astronomical observatories devoted to research, and not including that given for teaching, is estimated to amount to half a million dollars annually. Several of the larger observatories have an annual income of fifty thousand dollars.

I once asked the wisest man I know, what was the reason for this difference. He said that it was probably because astronomy appealed to the imagination. A practical man, who has spent all his life in his counting room or mill, is sometimes deeply impressed with the vast distances and grandeur of the problems of astronomy, and the very remoteness and difficulty of studying the stars attract him.

My object in calling your attention to this matter is the hope that what I have to say of the organization of astronomy may prove of use to those interested in other branches of science, and that it may lead to placing them on the footing they should hold. My arguments apply with almost equal force to physics, to chemistry, and in fact to almost every branch of physical or natural science, in which knowledge may be advanced by observation or experiment.

The practical value of astronomy in the past is easily established. Without it, international commerce on a large scale would have been impossible. Without the aid of astronomy, accurate boundaries of large tracts of land could not have been defined and standard time would have been impossible. The work of the early astronomers was eminently practical, and appealed at once to every one. This work has now been finished. We can compute the positions of the stars for years, almost for centuries, with all the accuracy needed for navigation, for determining time or for approximate boundaries of countries. The investigations now in progress at the greatest observatories have little, if any, value in dollars and cents. They appeal, however, to the far higher sense, the desire of the intellectual human being to determine the laws of nature, the construction of the material universe, and the properties of the heavenly bodies of which those known to exist far outnumber those that can be seen....