The Fur Bringers A Story of the Canadian Northwest 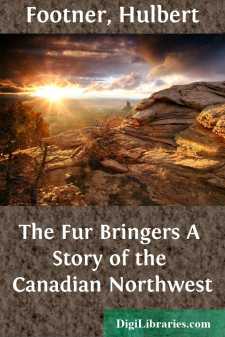 The firm of Minot & Doane sat on the doorsill of its store on LakeMiwasa smoking its after-supper pipes.

It was seven o'clock of a brilliant day in June. The westering sun shone comfortably on the world, and a soft breeze kept the mosquitoes at bay.

Moreover, the tobacco was of the best the store afforded; yet there was no peace between the two. They bickered like schoolboys kept indoors.

"How many link-skins in the bale you made up today?" asked Peter Minot.

"Three-seventy-two," his young partner answered in a surly tone that was in itself a provocation.

"I made it three-seventy-three," said Peter curtly.

"Well, you can claim the extra one, can't you," snarled Ambrose, "and make an allowance if it's found short?"

"That's not the way I like to do business!"

"Too bad about you!"

The older man frowned darkly, clamped his teeth upon his pipe, and held his tongue.

His silence was an additional aggravation to the other. "What do you want me to do," he burst out with an amount of passion absurdly disproportionate to the matter at issue, "cut it open and count it over and bale it up again?"

"To blazes with it!" said Peter. "I want you to keep your temper!"

"I'm sick of this!" cried Ambrose with the wilful abandon of one hopelessly in the wrong. "You're at me from morning till night! Nothing I do is right. Why can't you leave me alone?"

Peter took his pipe out of his mouth and looked at his young partner in astonishment. His face turned a dull brick color and his blue eyes snapped.

He spoke in a voice of portentous softness: "Who the hell do you think you are? A little gorramighty? To make a mistake is natural; to fly into a temper when it is discovered is childish. What's the matter with you these past ten days, anyway? A man can't look at you but you begin to bark and froth. You'd best go off by yourself a while and eat grass to cool your blood!"

Having delivered himself, Peter pulled deeply at his pipe and gazed across the lake with a scowl of honest resentment.

It was a long speech to come from Peter, and it went unexpectedly to the point. Ambrose was silenced. For a long time neither spoke.

Little by little the angry red faded out of Peter's cheeks and neck, and his forehead smoothed itself. Stealing a glance at young Ambrose, the blue eyes began to twinkle.

Ambrose twisted petulantly and muttered in his throat.

"Stick out your tongue!" commanded Peter.

Ambrose stared at him in angry stupefaction. "What the deuce—"

"No," said Peter, "you're not sick. Your eyeballs is as clean as new milk; your skin is as pink as a spanked baby. No, you're not sick, so to speak!"

There was another silence, Ambrose squirming a little and blushing under Peter's calm, speculative gaze.

"Have you anything against me?" Peter finally inquired. "If you have, out with it!"

"Forget it then!" cried Peter with a scornful, kindly grin....