The Fun of Cooking A Story for Girls and Boys 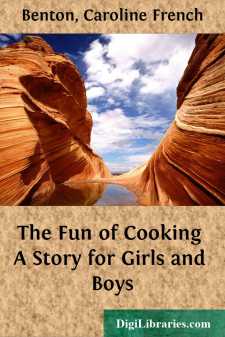 CHAPTER I THE DAY BEFORE CHRISTMAS

Saturdays and Sundays and vacation days were all holidays to them, and they did such interesting things, and laughed so much as they did them, that everybody said, "What good times those Blairs do have!"

Jack and Mildred Blair were named after their father and mother, and Brownie, whose real name was Katharine, was named for her grandmother; so to avoid getting everybody mixed, the children were called the Junior Blairs by everybody.

Now it happened that there were ever so many uncles and aunts and cousins who were Blairs, too, but most of them lived a long way off, and they were very seldom able to get together for a family party; but this winter, ten of them were coming to spend Christmas with the real Blairs, and, as five of them were between fourteen and twelve, the ages of Mildred and Jack, and some more about nine, like Brownie, they were all planning to have the very nicest sort of a time, and everybody was as excited as could be.

Christmas was only two days away, when, suddenly, it began to snow. And how it snowed! The flakes came down steadily hour after hour, and soon the sidewalks were covered, and the steps were buried, and the piles of snow almost covered the gate. Everybody said that all the trains were delayed; and it was not long before the little Blairs began to whisper, "Whatever shall we do if they can't get here in time for Christmas?" Mother Blair guessed what the trouble was, and said cheerfully that, of course, the snow would stop falling before long, and the trains would be on time in the morning.

"And a beautiful white Christmas is the loveliest thing in the world," she added. But the children looked out of the window and were afraid, deep down in their hearts, that something dreadful might happen.

"If we only had something nice to do right now," groaned Jack, "so we could forget the snow. But we can't trim the tree till everybody comes to help, and the presents are all tied up, and there isn't anything Christmasy to do that I can think of."

"Why not cook?" suggested Mother Blair, "There are lots of things to make—Christmas things, you know."

Mildred began to brighten up. "If we could cook things all alone, I'd like that," she said.

"Boys make pop-corn, though," laughed his mother. "And then suppose you make that up into nice balls, and have them all ready when the cousins come. And, Mildred, I think Norah would give you and Brownie one corner of the kitchen, and let you cook all by yourselves."

So Jack took the corn-popper and went down to the furnace, and when he opened the door, he found a great bed of red coals waiting for him; and Mildred and Brownie put on their big gingham aprons and went out into the kitchen.

Underneath the large table was a smaller one; this Mother Blair pulled out and pushed across the room to an empty place. Then she wrote out very plainly a little receipt, and under this she explained exactly how to put things together; this she pinned on the wall over the table. "There!" she said. "Now you can go right to work." This was what was on the paper:

Put the butter and sugar in a bowl, and rub them together till smooth and creamy....