The Fugitive Blacksmith or, Events in the History of James W. C. Pennington 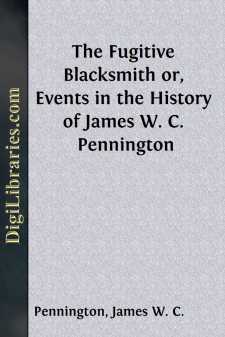 MY BIRTH AND PARENTAGE.—THE TREATMENT OF SLAVES GENERALLY IN MARYLAND.

I was born in the state of Maryland, which is one of the smallest and most northern of the slave-holding states; the products of this state are wheat, rye, Indian corn, tobacco, with some hemp, flax, &c. By looking at the map, it will be seen that Maryland, like Virginia her neighbour, is divided by the Chesapeake Bay into eastern and western shores. My birthplace was on the eastern shore, where there are seven or eight small counties; the farms are small, and tobacco is mostly raised.

At an early period in the history of Maryland, her lands began to be exhausted by the bad cultivation peculiar to slave states; and hence she soon commenced the business of breeding slaves for the more southern states. This has given an enormity to slavery, in Maryland, differing from that which attaches to the system in Louisiana, and equalled by none of the kind, except Virginia and Kentucky, and not by either of these in extent.

When I was about four years of age, my mother, an older brother and myself, were given to a son of my master, who had studied for the medical profession, but who had now married wealthy, and was about to settle as a wheat planter in Washington County, on the western shore. This began the first of our family troubles that I knew anything about, as it occasioned a separation between my mother and the only two children she then had, and my father, to a distance of about two hundred miles. But this separation did not continue long; my father being a valuable slave, my master was glad to purchase him.

About this time, I began to feel another evil of slavery—I mean the want of parental care and attention. My parents were not able to give any attention to their children during the day. I often suffered much from hunger and other similar causes. To estimate the sad state of a slave child, you must look at it as a helpless human being thrown upon the world without the benefit of its natural guardians. It is thrown into the world without a social circle to flee to for hope, shelter, comfort, or instruction. The social circle, with all its heaven-ordained blessings, is of the utmost importance to the tender child; but of this, the slave child, however tender and delicate, is robbed.

There is another source of evil to slave children, which I cannot forbear to mention here, as one which early embittered my life,—I mean the tyranny of the master's children. My master had two sons, about the ages and sizes of my older brother and myself. We were not only required to recognise these young sirs as our young masters, but they felt themselves to be such; and, in consequence of this feeling, they sought to treat us with the same air of authority that their father did the older slaves....