The Frontier in American History 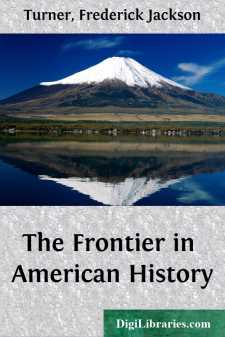 In republishing these essays in collected form, it has seemed best to issue them as they were originally printed, with the exception of a few slight corrections of slips in the text and with the omission of occasional duplication of language in the different essays. A considerable part of whatever value they may possess arises from the fact that they are commentaries in different periods on the central theme of the influence of the frontier in American history. Consequently they may have some historical significance as contemporaneous attempts of a student of American history, at successive transitions in our development during the past quarter century to interpret the relations of the present to the past. Grateful acknowledgment is made to the various societies and periodicals which have given permission to reprint the essays.

Various essays dealing with the connection of diplomatic history and the frontier and others stressing the significance of the section, or geographic province, in American history, are not included in the present collection. Neither the French nor the Spanish frontier is within the scope of the volume.

The future alone can disclose how far these interpretations are correct for the age of colonization which came gradually to an end with the disappearance of the frontier and free land. It alone can reveal how much of the courageous, creative American spirit, and how large a part of the historic American ideals are to be carried over into that new age which is replacing the era of free lands and of measurable isolation by consolidated and complex industrial development and by increasing resemblances and connections between the New World and the Old.

But the larger part of what has been distinctive and valuable in America's contribution to the history of the human spirit has been due to this nation's peculiar experience in extending its type of frontier into new regions; and in creating peaceful societies with new ideals in the successive vast and differing geographic provinces which together make up the United States. Directly or indirectly these experiences shaped the life of the Eastern as well as the Western States, and even reacted upon the Old World and influenced the direction of its thought and its progress. This experience has been fundamental in the economic, political and social characteristics of the American people and in their conceptions of their destiny.

Writing at the close of 1796, the French minister to the United States, M. Adet, reported to his government that Jefferson could not be relied on to be devoted to French interests, and he added: "Jefferson, I say, is American, and by that name, he cannot be sincerely our friend. An American is the born enemy of all European peoples." Obviously erroneous as are these words, there was an element of truth in them. If we would understand this element of truth, we must study the transforming influence of the American wilderness, remote from Europe, and by its resources and its free opportunities affording the conditions under which a new people, with new social and political types and ideals, could arise to play its own part in the world, and to influence Europe....