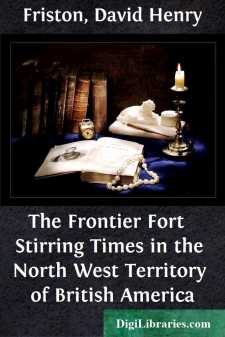 A party of travellers were wending their way across a wide-spreading prairie in the north-west territory of America. As far as the eye could reach, the ground was covered with waving tufts of dark-green grass, interspersed with flowers of varied hue, among which could be distinguished the yellow marigold and lilac bergamot, with bluebells, harebells, and asters, innumerable; while here and there rose-bushes, covered with gorgeous bloom, appeared above the particoloured carpet spread over the country. On the north side the prairie was bounded by softly rounded knolls, between which tiny lakelets were visible, shining in the bright rays of the glowing sun. To the northward a silvery stream could be seen meandering, bordered by willows, aspens, osiers, and other trees of considerable height, breaking the line of the horizon.

“I am delighted with your country, Burnett; I had no idea such lovely scenery and so much rich soil existed on this side of the Rocky Mountains,” said one of the travellers, addressing another, who rode alongside him.

“I hope, before many years are over, to see this fair region covered with populous towns and villages, and flourishing farms.”

“That time is far distant, I suspect,” answered Mr Burnett, a head clerk of the Hudson’s Bay Company, in charge of the party; “and I can only say that I hope so, for when it comes, our vocation will be well-nigh gone, as the Company will have to shut up shop—”

“And retire on well-won fortunes,” laughingly added the first speaker, Reginald Loraine. He was a young Englishman of good fortune and family, who had lately come out to make a tour in Canada; but having heard conflicting reports of the north-west territory, he had been induced to continue his journey westward, intending to proceed as far as the foot of the Rocky Mountains, and to return, before the termination of the summer, from Fort Edmonton, down the Saskatchewan, and through Lake Winnipeg to the Red River.

His intelligence, high spirits, and good humour made him an agreeable companion. He was never put out by any mishaps or inconveniences. His personal appearance was also much in his favour; while he was a good rider, and possessed of activity and endurance, equal, if not superior, to any of the rest of the party, long accustomed though they were to the mode of life they were leading.

From the sentiments he uttered, and the expression of his handsome countenance, it might have been surmised that he possessed many other qualities of a higher character. Young Hector Mackintosh, who had come with him from Toronto, declared, indeed, that he never wished to have a stauncher fellow at his back in a skirmish with Redskins, or in a fight with a grizzly, and that he was as high-minded and generous as he was brave.

Hector, who was now curvetting over the prairie on a tough little mustang, had been at school at Toronto, whence he was returning to rejoin his father, Captain Mackintosh, now a chief officer, or factor, in charge of Fort Duncan, a Company’s post to the south-west, situated on the borders of the Blackfeet territory. It was a somewhat dangerous position, which only a man of courage and resolution would willingly have occupied.

Following at some little distance those who have been mentioned, came three other horsemen, whose shouts of laughter, interspersed occasionally with snatches of songs, could be heard far across the prairie. The centre of the three was a short, portly gentleman, with a somewhat rubicund countenance—Doctor McCrab, just appointed surgeon to one of the forts in the west. On either side of him rode two young clerks. One of them was Dan Maloney, a light-hearted Irishman, with whom the jolly Doctor amused himself by exchanging jokes, capping verses, and singing duets which set all the laws of harmony at defiance....