The Frog Who Would A Wooing Go 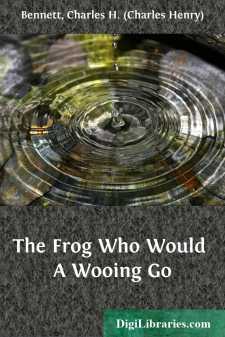 A Frog he would a-wooing go, Whether his mother would let him or no. Off he set with his opera-hat. On the road he met with a Rat.     "Pray, Mr. Rat, will you go with me, Kind Mrs. Mousey for to see?" They soon arrived at Mousey's hall. They gave a loud tap, and they gave a loud call.     "Pray, Mrs. Mouse, are you within?" "Yes, kind sirs, and sitting to spin." "Pray, Mrs. Mouse, now give us some beer, That Froggy and I may have good cheer."     "Pray, Mr. Frog, will you give us a song? Let the subject be something that's not very long." "Indeed, Mrs. Mouse," replied the Frog, "A cold has made me as hoarse as a hog."     "Since you have caught cold, Mr. Frog," Mousey said, "I'll sing you a song that I have just made." As they were in glee and merrymaking, A Cat and her kittens came tumbling in.     The Cat she seized the Rat by the crown, The kittens they pulled the little Mouse down. This put Mr. Frog in a terrible fright, He took up his hat, and he wished them good night.     As Froggy was crossing it over a brook, A lilywhite Duck came and gobbled him up. So here is an end of one, two, three— The Rat, the Mouse, and little Froggy.     THE FROG WHO WOULD A-WOOING GO. By CHARLES BENNETT.

On the quiet sedgy bank of a stagnant pool, and under the shadow of rank reeds and bulrushes, sat two frogs. They had retired from the shoal, who were disporting themselves in the water, and were earnestly talking. The elder of the two, an old matron, addressing the younger, who, by-the-by, was her son, said,—

"My dear Froggy, you had better stop quietly with me; you do not know what dangers you may encounter, if you leave your secluded home."

"Ah, my son!" continued the old lady, "I see that, like most young frogs, you are very obstinate, and will not listen to reason. But why on earth you should wish to go gadding after a poor, hungry little mouse, is more than I can tell—you with your beautiful legs and speckled coat, born to a splendid estate of reeds and water, the heir of nine bulrushes and a water-lily. I thought you were more of a frog."

"Have you thought of the boys who throw stones?"

"Or the birds with long beaks?"

"If you want to go a-wooing, there are frogs in your own station in life; indeed, with your personal appearance, you might even aspire to an eft or a lizard."

"You are no better than a tadpole!" said his mother, getting very angry at last; and no sooner were the words out of her lips, than up jumped Master Froggy in a passion, and taking his opera-hat under his arm, off he went at a rapid pace, singing at the top of his voice, so as to hide his rage,—

Froggy had not walked very far before he saw, jogging on before him, a brown little fellow in a long-tail coat and Blucher boots, who carried an old cotton umbrella....