The Friendships of Women 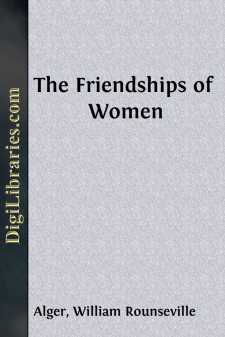 A STATEMENT of the facts in which this book began may gratify the curiosity of some of its readers.

While gathering materials for a History of Friendship, I was often struck both by the small number of recorded examples of the sentiment among women, which were discovered in my researches, and by the commonness of the expressed belief, that strong natural obstacles make friendship a comparatively feeble and rare experience with them. Spurred by further thought, as well as by many talks, I kept on exploring the subject. At length, so much matter was mustered that I determined to insert in my work a distinct chapter on the Friendships of Women. Still the subject grew in interest for me, and the bulk of historic illustration swelled beyond the size of a chapter. Then I decided to make a little treatise of it by itself.

The principle and sentiment of friendship deserve a much larger share of the attention given, alike in the life and the literature of our time, to the passion of love. One would infer from most of the popular writings of the day, that love is the only emotion worthy of notice. But surely there are in human nature other feelings, which demand far more culture than they generally receive, feelings which really play an important part in human life, and which ought to play a still more important part. Am I deceived in thinking, that, in particular, the place of friendship in the Live; of women is a subject which, if soundly discussed, and set forth with mastery and sympathy, may give precious guidance, comfort, and inspiration to thousands of embittered and languishing souls? Will not the large number, who are denied the satisfactions of impassioned love, be grateful for a book which shows them what rich and noble resources they may find in his widely different, though closely kindred, sentiment? Is not such a book especially needed at he present time?

In method of treatment, I have, without neglecting moral analysis or reflective exposition, even greater prominence to biographic narrative, living presentation of instances from which the reader may draw the befitting lessons of the topic, and apply them for personal profit. Poetry, it has been said, is balm on the wounds of non- fulfilment in our lives. When our own experience and imagination are wanting in that balm, we must borrow it from others. If we muse, with open heart, on the enthusiastic dreams and fruitions of more richly impassioned or more happily placed natures, the contagious glow of their affections may enkindle ours. This is one of the highest uses of art, a use which puts on artists the duty of setting before their patrons sights of righteousness and bliss, trust and peace, rather than sights of wretchedness, wrangling, doubt, and error.

In conjoined importance and interest, to those who have a taste for it, no other study can compare with the study of human nature and human experience, as illustrated in individual examples. If the students are curious as to the secrets of greatness, and are emulous of excellence, the attraction is enhanced when they deal with persons of extraordinary powers and careers....