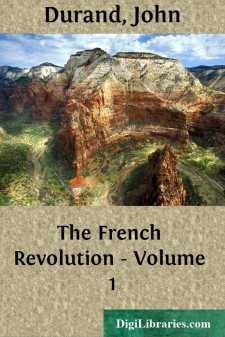 This second part of "Les Origines de la France Contemporaine" will consist of two volumes.—Popular insurrections and the laws of the Constituent Assembly end in destroying all government in France; this forms the subject of the present volume.—A party arises around an extreme doctrine, grabs control of the government, and rules in conformity with its doctrine. This will form the subject of the second volume.

A third volume would be required to criticize and evaluate the source material. I lack the necessary space: I merely state the rule that I have observed. The trustworthiest testimony will always be that of an eyewitness, especially

* When this witness is an honorable, attentive, and intelligent man,

* When he is writing on the spot, at the moment, and under the dictate of the facts themselves,

* When it is obvious that his sole object is to preserve or furnish information,

* When his work instead of a piece of polemics planned for the needs of a cause, or a passage of eloquence arranged for popular effect is a legal deposition, a secret report, a confidential dispatch, a private letter, or a personal memento.

The nearer a document approaches this type, the more it merits confidence, and supplies superior material.—I have found many of this kind in the national archives, principally in the manuscript correspondence of ministers, intendants, sub-delegates, magistrates, and other functionaries; of military commanders, officers in the army, and gendarmerie; of royal commissioners, and of the Assembly; of administrators of departments, districts, and municipalities, besides persons in private life who address the King, the National Assembly, or the ministry. Among these are men of every rank, profession, education, and party. They are distributed by hundreds and thousands over the whole surface of the territory. They write apart, without being able to consult each other, and without even knowing each other. No one is so well placed for collecting and transmitting accurate information. None of them seek literary effect, or even imagine that what they write will ever be published. They draw up their statements at once, under the direct impression of local events. Testimony of this character, of the highest order, and at first hand, provides the means by which all other testimony ought to be verified.—The footnotes at the bottom of the pages indicate the condition, office, name, and address of those decisive witnesses. For greater certainty I have transcribed as often as possible their own words. In this way the reader, confronting the texts, can interpret them for himself, and form his own opinions; he will have the same documents as myself for arriving at his conclusions, and, if he is pleased to do so, he may conclude otherwise. As for allusions, if he finds any, he himself will have introduced them, and if he applies them he is alone responsible for them. To my mind, the past has features of its own, and the portrait here presented resembles only the France of the past....