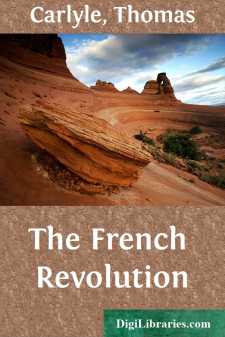 Chapter 1.1.I. Louis the Well-Beloved.

President Henault, remarking on royal Surnames of Honour how difficult it often is to ascertain not only why, but even when, they were conferred, takes occasion in his sleek official way, to make a philosophical reflection. 'The Surname of Bien-aime (Well-beloved),' says he, 'which Louis XV. bears, will not leave posterity in the same doubt. This Prince, in the year 1744, while hastening from one end of his kingdom to the other, and suspending his conquests in Flanders that he might fly to the assistance of Alsace, was arrested at Metz by a malady which threatened to cut short his days. At the news of this, Paris, all in terror, seemed a city taken by storm: the churches resounded with supplications and groans; the prayers of priests and people were every moment interrupted by their sobs: and it was from an interest so dear and tender that this Surname of Bien-aime fashioned itself, a title higher still than all the rest which this great Prince has earned.' (Abrege Chronologique de l'Histoire de France (Paris, 1775), p. 701.)

So stands it written; in lasting memorial of that year 1744. Thirty other years have come and gone; and 'this great Prince' again lies sick; but in how altered circumstances now! Churches resound not with excessive groanings; Paris is stoically calm: sobs interrupt no prayers, for indeed none are offered; except Priests' Litanies, read or chanted at fixed money-rate per hour, which are not liable to interruption. The shepherd of the people has been carried home from Little Trianon, heavy of heart, and been put to bed in his own Chateau of Versailles: the flock knows it, and heeds it not. At most, in the immeasurable tide of French Speech (which ceases not day after day, and only ebbs towards the short hours of night), may this of the royal sickness emerge from time to time as an article of news. Bets are doubtless depending; nay, some people 'express themselves loudly in the streets.' (Memoires de M. le Baron Besenval (Paris, 1805), ii. 59-90.) But for the rest, on green field and steepled city, the May sun shines out, the May evening fades; and men ply their useful or useless business as if no Louis lay in danger.

Dame Dubarry, indeed, might pray, if she had a talent for it; Duke d'Aiguillon too, Maupeou and the Parlement Maupeou: these, as they sit in their high places, with France harnessed under their feet, know well on what basis they continue there. Look to it, D'Aiguillon; sharply as thou didst, from the Mill of St. Cast, on Quiberon and the invading English; thou, 'covered if not with glory yet with meal!' Fortune was ever accounted inconstant: and each dog has but his day.

Forlorn enough languished Duke d'Aiguillon, some years ago; covered, as we said, with meal; nay with worse. For La Chalotais, the Breton Parlementeer, accused him not only of poltroonery and tyranny, but even of concussion (official plunder of money); which accusations it was easier to get 'quashed' by backstairs Influences than to get answered: neither could the thoughts, or even the tongues, of men be tied....