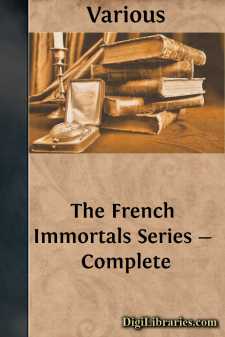 CHAPTER I. THE HOUSE OF DESVARENNES

The firm of Desvarennes has been in an ancient mansion in the Rue Saint Dominique since 1875; it is one of the best known and most important in French industry. The counting-houses are in the wings of the building looking upon the courtyard, which were occupied by the servants when the family whose coat-of-arms has been effaced from above the gate-way were still owners of the estate.

Madame Desvarennes inhabits the mansion which she has had magnificently renovated. A formidable rival of the Darblays, the great millers of France, the firm of Desvarennes is a commercial and political power. Inquire in Paris about its solvency, and you will be told that you may safely advance twenty millions of francs on the signature of the head of the firm. And this head is a woman.

This woman is remarkable. Gifted with keen understanding and a firm will, she had in former times vowed to make a large fortune, and she has kept her word.

She was the daughter of a humble packer of the Rue Neuve-Coquenard. Toward 1848 she married Michel Desvarennes, who was then a journeyman baker in a large shop in the Chaussee d'Antin. With the thousand francs which the packer managed to give his daughter by way of dowry, the young couple boldly took a shop and started a little bakery business. The husband kneaded and baked the bread, and the young wife, seated at the counter, kept watch over the till. Neither on Sundays nor on holidays was the shop shut.

Through the window, between two pyramids of pink and blue packets of biscuits, one could always catch sight of the serious-looking Madame Desvarennes, knitting woollen stockings for her husband while waiting for customers. With her prominent forehead, and her eyes always bent on her work, this woman appeared the living image of perseverance.

At the end of five years of incessant work, and possessing twenty thousand francs, saved sou by sou, the Desvarennes left the slopes of Montmartre, and moved to the centre of Paris. They were ambitious and full of confidence. They set up in the Rue Vivienne, in a shop resplendent with gilding and ornamented with looking-glasses. The ceiling was painted in panels with bright hued pictures that caught the eyes of the passers-by. The window-shelves were of white marble, and the counter, where Madame Desvarennes was still enthroned, was of a width worthy of the receipts that were taken every day. Business increased daily; the Desvarennes continued to be hard and systematic workers. The class of customers alone had changed; they were more numerous and richer. The house had a specialty for making small rolls for the restaurants. Michel had learned from the Viennese bakers how to make those golden balls which tempt the most rebellious appetite, and which, when in an artistically folded damask napkin, set off a dinner-table.

About this time Madame Desvarennes, while calculating how much the millers must gain on the flour they sell to the bakers, resolved, in order to lessen expenses, to do without middlemen and grind her own corn....