The Freethinker's Text Book, Part II. Christianity: Its Evidences, Its Origin, Its Morality, Its History 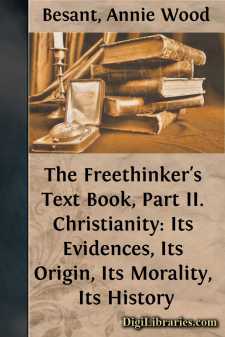 The origin of all religions, and the ignorance which is the root of the God-idea, having been dealt with in Part I. of this Text-Book, it now becomes our duty to investigate the evidences of the origin and of the growth of Christianity, to examine its morality and its dogmas, to study the history of its supposed founder, to trace out its symbols and its ceremonies; in fine, to show cause for its utter rejection by the Freethinker. The foundation stone of Christianity, laid in Paradise by the Creation and Fall of Man 6,000 years ago, has already been destroyed in the first section of this work; and we may at once, therefore, proceed to Christianity itself. The history of the origin of the creed is naturally the first point to deal with, and this may be divided into two parts: 1. The evidences afforded by profane history as to its origin and early growth. 2. Its story as told by itself in its own documents.

The most remarkable thing in the evidences afforded by profane history is their extreme paucity; the very existence of Jesus cannot be proved from contemporary documents. A child whose birth is heralded by a star which guides foreign sages to Judæa; a massacre of all the infants of a town within the Roman Empire by command of a subject king; a teacher who heals the leper, the blind, the deaf, the dumb, the lame, and who raises the mouldering corpse; a King of the Jews entering Jerusalem in triumphal procession, without opposition from the Roman legions of Cæsar; an accused ringleader of sedition arrested by his own countrymen, and handed over to the imperial governor; a rebel adjudged to death by Roman law; a three hours' darkness over all the land; an earthquake breaking open graves and rending the temple veil; a number of ghosts wandering about Jerusalem; a crucified corpse rising again to life, and appearing to a crowd of above 500 people; a man risen from the dead ascending bodily into heaven without any concealment, and in the broad daylight, from a mountain near Jerusalem; all these marvellous events took place, we are told, and yet they have left no ripple on the current of contemporary history. There is, however, no lack of such history, and an exhaustive account of the country and age in which the hero of the story lived is given by one of his own nation—a most painstaking and laborious historian. "How shall we excuse the supine inattention of the Pagan and philosophic world to those evidences which were presented by the hand of Omnipotence, not to their reason, but to their senses? During the age of Christ, of his apostles, and of their first disciples, the doctrine which they preached was confirmed by innumerable prodigies. The lame walked, the blind saw, the sick were healed, the dead were raised, demons were expelled, and the laws of nature were frequently suspended for the benefit of the Church. But the sages of Greece and Rome turned aside from the awful spectacle, and, pursuing the ordinary occupations of life and study, appeared unconscious of any alterations in the moral or physical government of the world....