The Freedom of Life 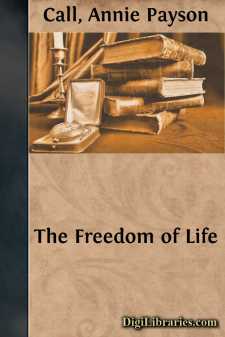 The Freedom of Life

I AM so tired I must give up work," said a young woman with a very strained and tearful face; and it seemed to her a desperate state, for she was dependent upon work for her bread and butter. If she gave up work she gave up bread and butter, and that meant starvation. When she was asked why she did not keep at work and learn to do it without getting so tired, that seemed to her absurd, and she would have laughed if laughing had been possible.

"I tell you the work has tired me so that I cannot stand it, and you ask me to go back and get rest out of it when I am ready to die of fatigue. Why don't you ask me to burn myself, on a piece of ice, or freeze myself with a red-hot poker?"

"But," the answer was, "it is not the work that tires you at all, it is the way you do it;" and, after a little soothing talk which quieted the overexcited nerves, she began to feel a dawning intelligence, which showed her that, after all, there might be life in the work which she had come to look upon as nothing but slow and painful death. She came to understand that she might do her work as if she were working very lazily, going from one thing to another with a feeling as near to entire indifference as she could cultivate, and, at the same time, do it well. She was shown by illustrations how she might walk across the room and take a book off the table as if her life depended upon it, racing and pushing over the floor, grabbing the book and clutching it until she got back to her seat, or, how she might move with exaggerated laziness take the book up loosely, and drag herself back again. This illustration represents two extremes, and one, in itself, is as bad as the other; but, when the habit has been one of unnecessary strain and effort, the lazy way, practised for a time, will not only be very restful, but will eventually lead to movement which is quick as well.

To take another example, you may write holding the pen with much more force than is needful, tightening your throat and tongue at the same time, or you may drag your pen along the paper and relieve the tendency to tension in your throat and tongue by opening your mouth slightly and letting your jaw hang loosely. These again are two extremes, but, if the habit has been one of tension, a persistent practice of the extreme of looseness will lead to a quiet mode of writing in which ten pages can be finished with the effort it formerly took to write one.

Sometimes the habit of needless strain has taken such a strong hold that the very effort to work quietly seems so unnatural as to cause much nervous suffering. To turn the corner from a bad habit into a true and wholesome one is often very painful, but, the first pain worked through, the right habit grows more and more easy, until finally the better way carries us along and we take it involuntarily.

For the young woman who felt she had come to the end of her powers, it was work or die; therefore, when she had become rested enough to see and understand at all, she welcomed the idea that it was not her work that tired her, but the way in which she did it, and she listened eagerly to the directions that should teach her to do it with less fatigue, and, as an experiment, offered to go back and try the "lazy way" for a week....