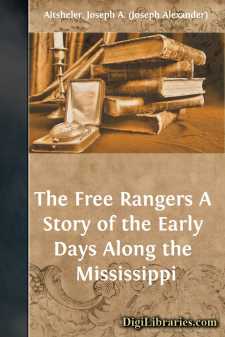 The wilderness rolled away to north and to south, and also it rolled away to east and to west, an unbroken sweep of dark, glossy green. Straight up stood the mighty trunks, but the leaves rippled and sang low when a gentle south wind breathed upon them. It was the forest as God made it, the magnificent valley of North America, upon whose edges the white man had just begun to nibble.

A young man, stepping lightly, came into a little glade. He was white, but he brought with him no alien air. He was in full harmony with the primeval woods, a part of them, one in whose ears the soft song of the leaves was a familiar and loved tune. He was lean, but tall, and he walked with a wonderful swinging gait that betokened a frame wrought to the strength of steel by exercise, wind, weather, and life always in the open. Though his face was browned by sun and storm his hair was yellow and his eyes blue. He was dressed wholly in deerskin and he carried over his shoulder the long slender rifle of the border. At his belt swung hatchet and knife.

There was a touch to the young man that separated him from the ordinary woods rover. He held himself erect with a certain pride of manner. The stock of his rifle, an unusually fine piece, was carved in an ornate and beautiful way. The deerskin of his attire had been tanned with uncommon care, and his moccasins were sewn thickly with little beads of yellow and blue and red and green. Every piece of clothing was scrupulously clean, and his arms were polished and bright.

The shiftless one—who so little deserved his name—paused a moment in the glade and, dropping the stock of his rifle to the ground, leaned upon the muzzle. He listened, although he expected to hear nothing save the song of the leaves, and that alone he heard. A faint smile passed over the face of Shif'less Sol. He was satisfied. All was happening as he had planned. Then he swung the rifle back to his shoulder, and walked to the crest of a hill near by.

The summit was bare and the shiftless one saw far. It was a splendid rolling country, covered with forests of oak and elm, beech, hickory and maple. Here and there faint threads of silver showed where rivers or brooks flowed, and he drew a long deep breath. The measure of line and verse he knew not, but deep in his being Nature had kindled the true fire of poetry, and now his pleasure was so keen and sharp that a throb of emotion stirred in his throat. It was a grand country and, if reserved for any one, it must be reserved for his race and his people. Shif'less Sol was resolved upon that purpose and to it he was ready to devote body and life.

Yet the wilderness seemed to tell only of peace. The low song of the leaves was soothing and all innocence. The shiftless one was far beyond the farthest outpost of his kind, beyond the broad yellow current of the Mississippi, deep in the heart of the primeval forest. He might travel full three hundred miles to the eastward and find no white cabin, while to westward his own kind were almost a world away....