The Framework of Home Rule 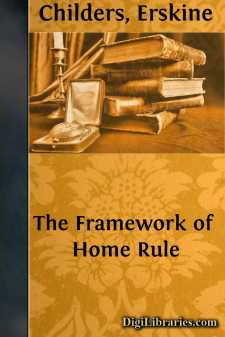 My purpose in this volume is to advocate a definite scheme of self-government for Ireland. That task necessarily involves an historical as well as a constructive argument. It would be truer, perhaps, to say that the greater part of the constructive case for Home Rule must necessarily be historical. To postulate a vague acceptance of the principle of Home Rule, and to proceed at once to the details of the Irish Constitution, would be a waste of time and labour. It is impossible even to attempt to plan the framework of a Home Rule Bill without a tolerably close knowledge not only of Anglo-Irish relations, but of the Imperial history of which they form a part. The Act will succeed exactly in so far as it gives effect to the lessons of experience. It will fail at every point where those lessons are neglected. Constitutions which do not faithfully reflect the experience of the sovereign power which accords them, and of the peoples which have to live under them, are at the best perilous experiments liable to defeat the end of their framers.

I shall enter into history only so far as it is relevant to the constitutional problem, using the comparative method, and confining myself almost exclusively to the British Empire past and present. For the purposes of the Irish controversy it is unnecessary to travel farther. In one degree or another every one of the vexed questions which make up the Irish problem has arisen again and again within the circle of the English-speaking races. As a nation we have a body of experience applicable to the case of Ireland incomparably greater than that possessed by any other race in the world. If, from timidity, prejudice, or sheer neglect, we fail to use it, we shall earn the heavy censure reserved for those who sin against the light.

For the comparative sketch I shall attempt, materials in the shape of facts established beyond all controversy are abundant. Colonial history, thanks to colonial freedom, is almost wholly free from the distorting influence of political passion. South African history alone will need revision in the light of recent events. When, under the alchemy of free national institutions, Ireland has undergone the same transformation as South Africa, her unhappy history will be chronicled afresh with a juster sense of perspective and a juster apportionment of responsibility for the calamities which have befallen her. And yet, if we consider the field for partisan bias which Irish history presents, the amount of ground common to writers of all shades of political opinion is now astonishingly large. The result, I think, is due mainly to the good influence of that eminent historian and Unionist politician, the late Professor Lecky. Indeed, an advocate of Home Rule, nervously suspicious of tainted material, could afford to rely solely on his "History of Ireland in the Eighteenth Century," "Leaders of Public Opinion in Ireland," and "Clerical Influences," which are Nationalist textbooks, and, for quite recent events, on "A Consideration of Ireland in the Nineteenth Century," by Mr. G. Locker-Lampson, the present Unionist Member for Salisbury. A strange circumstance; but Ireland, like all countries where political development has been forcibly arrested from without, is a land of unending paradox. It is only one of innumerable anomalies that Irish Nationalists should use Unionist histories as propaganda for Nationalism; that the majority of Irish Unionists should insist on ignoring all historical traditions save those which in any normal country would long ago have been consigned by general consent to oblivion and the institutions they embody overthrown; and that Unionist writers such as those I have mentioned should be able to reconcile their history and their politics only by a pessimism with regard to the tendencies of human nature in general, or of Irish nature in particular, with which their own historical teaching, founded on a true perception of cause and effect, appears to be in direct contradiction.

The truth is that the question is one of the construction, not of the verification, of facts; of prophecy for the future, rather than of bare affirmation or negation. No one can presume to determine such a question without a knowledge of how human beings have been accustomed to act under similar circumstances. Illumination of that sort Irish history and the contemporary Irish problem incontestably need. The modern case for the Union rests mainly on the abnormality of Ireland, and that is precisely why it is such a formidable case to meet. For Ireland in many ways is painfully abnormal. The most cursory study of her institutions and social, economic, and political life demonstrate that fact. The Unionist, fixing his eyes on some of the secondary peculiarities, and ignoring their fundamental cause, demonstrates it with ease, and by a habit of mind which yields only with infinite slowness to the growth of political enlightenment, passes instinctively to the deduction that Irish abnormalities render Ireland unfit for self-government....