The Fourth Dimensional Reaches of the Panama-Pacific International Exposition 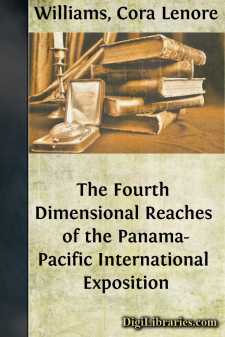 Friar Bacon, reading one day of the many conquests of England, bethought himself how he might keep it hereafter from the like conquests and so make himself famous to all posterity. This (after great study) he found could be no way so well done as one; which was to make a head of brass, and if he could make this head to speak (and hear it when it spoke) then might he be able to wall all England about with brass. To this purpose he got one Friar Bungey to assist him, who was a great scholar and magician (but not to be compared to Friar Bacon); these two with great study and pains so formed a head of brass that in the inward parts thereof there was all things like as in a natural man's head. This being done they were as far from perfection of the work as they were before, for they knew not how to give those parts that they had made motion, without which it was impossible that it should speak. Many books they read, but yet could not find out any hope of what they sought, that at the last they concluded to raise a spirit and to know of him that which they could not attain by their own studies.

The spirit straight obeyed, and appeared unto them, asking what they would. He told them that with a continual fume of the six hottest simples it should have motion, and in one month space speak: the time of the month: or the day he knew not. Also he told them that if they heard it not before it had done speaking, all their labor should be lost.

Then went these two learned Friars home again and prepared the simples ready and made the fume, and with continual watching attended when this Brazen Head should speak. Thus watched they for three weeks without any rest, so that they were so weary and sleepy that they could not any longer refrain from rest. Then called Friar Bacon his man Miles, and told him that it was not unknown to him what pains Friar Bungey and himself had taken for three weeks space only to make and to hear the Brazen Head speak, which if they did not, then had they lost all their labor, and all England had a great loss thereby. Therefore he entreated Miles that he would watch whilst that they slept and call them if the head spake. 'Fear not (good master), I will harken and attend, upon the head and if it do chance to speak, I will call you; therefore, I pray take you both your rest and let me alone for watching this head.'

At last, after some noise, the Head spake these two words: 'Time is.' Miles, hearing it to speak no more, thought his master would be angry if he waked him for that, and therefore he let them both sleep and began to mock the Head in this manner: 'Thou Brazen-faced Head, hath my master took all this pains about thee and now dost thou requite him with two words, "Time is"?'

After half an hour had past, the Head did speak again two words which were these: 'Time was.' Miles respected these words as little as he did the former and would not wake his master, but still scoffed at the Brazen Head, that it had learned no better words, and have had such a tutor as his master; * * * * '"Time was!" I knew that, Brazen-face, without your telling....