The Four Epochs of Woman's Life; a study in hygiene 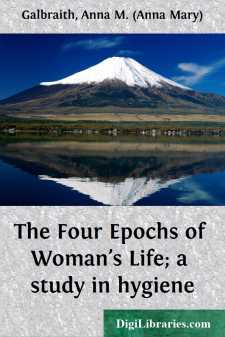 It should be able to stand up by a chair by the tenth month, and be able to walk alone at the end of the first year. It is important that parents should know this, since not knowing what a normal baby ought to be able to do, cases of birth palsy, or even an attack of paralysis due to teething, are not infrequently overlooked, not only by the mother, but even by the doctor, who attributes the inability of the child to do what other children can do at this age simply to weakness, which the child will outgrow; and thus the time passes in which the most could be done to cure the child and to prevent the subsequent deformity.

A baby should not be forced to stand or walk; a very stout baby, on account of its weight, will stand up and walk much later than a slight one, the two being equally healthy. Or if a baby has been sick, it will feel no inclination to stand up. Naturally, a child creeps before it walks, and this develops the muscles of the lower limbs, so that they will support the weight of the child in standing. By prematurely forcing a child to stand up and walk, there is danger of causing bow-legs, as the bones of the legs are still weak; the child should be discouraged from standing up too much rather than encouraged to stand up more.

Sleep.— A large proportion of the time of early infancy is spent in sleep; for the first few weeks the infant only wakens up to be fed. During sleep the eyelids should be tightly closed; a partial opening of the lids, showing the whites of the eyes, is an indication of ill health. Up to the age of six, children require twelve hours of sleep at night, besides an hour or more in the middle of the day; the child should be permitted to sleep as long in the morning as it will.

Respiration.— The healthy infant breathes on an average forty-four times a minute; the only time the respirations can be satisfactorily counted is during sleep. When the child is awake, the respirations are hurried by slight movements of the body, crying, and so forth. The average pulse of a newborn baby is one hundred and forty; this is hurried by the same causes that hastens respirations; the pulse is most easily counted at the anterior fontanel. The average temperature of the infant is 99° F. When the tip of the nose and the extremities are cold, it indicates a lowered vitality.

The nature of the child's cry indicates, variously, hunger, temper, or pain; the mother will soon learn to distinguish these varieties. If the child cries because it is hungry, the cry ceases so soon as it is fed. But a child is never to be fed simply because it cries; it must be fed on the hour by the clock. If this rule is not strictly adhered to, it will suffer all the forms of indigestion and colic that babies are heir to. If it cries because of colic, there is a drawn look on the face, and at the same time the legs are sharply flexed on the thighs and the thighs on the abdomen. If the cries are due to earache, the head will be rolled about from one side to the other. In either case nothing will stop the cries until the pain is relieved. A baby does not shed tears until the third month.

The Stools.— The stools of a very young baby fed on breast-milk should be of a yellow or orange color. There should be three or four evacuations daily; they should contain no curds. Stools of bottle-fed babies are lighter in color and more offensive.