The Four Canadian Highwaymen or, The Robbers of Markham Swamp 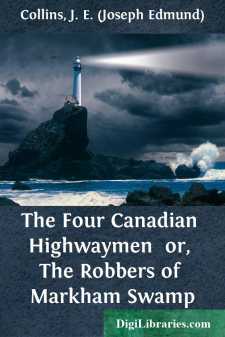 THE PRETTY ASTER AND MR. HAM.

It was the autumn of the year, and the dress of the Canadian woods at that season, forty years ago, differed little from the gaudy garbs of now. Near a small village not far from the town of Little York, I choose as the place for the opening of this true story.

The maple, of all the trees in the forest, was the only one so far frost-smitten and sun-struck. The harvests had been gathered, and the only tenants of the fields were flocks of pigeons that came to feed among the stubble; for many a ripe ear fell from the heads in the tying of the sheaves; many a shower of the golden grain had fallen as the load, drawn by slow oxen, lurched and swayed along the uneven ground.

Nestling in a grove of primeval pines that sentinelled the placid, shining waters of the Don stood a low, wide-eaved cottage. It was completely clad in ivy; and upon the eastern side there was a dull copper tinge through the matted masses of the Virginia creeper.

Many of the earlier flowers had faded; but the pinks and the poppies were still rich in blood; and the sunflower sturdily held up its yellow face like 'a wizened sorcerer of old,' as a fair and gifted friend of my acquaintance puts it. The cottage and the grounds about it were the property of an English gentleman of taste and means. The nearest dwelling had an air of luxury, and round about it stretched wide areas of land from which the harvest of wheat and oats had been taken. Here and there in the distance a group of boys might be seen with their fishing rods in their hands; for at that day the Don stream was not foul by the drainage of fields, and shrunken from the downpour of the sun, and from the loss of its sheltering forest. Trout and often salmon-trout went into its quiet retreats in the face of the spring freshets; and many a congregation of foam bubbles did it hold upon its breast to screen the greedy, vigilant speckled trout.

In a little summer house through whose latticed sides the gadding vines were so interlocked and twined, as to remind you of the legend of Salmacis and Hermes' son, sat a girl. Her wide-brimmed hat rested upon the seat beside her, and round about it was a double girdle of ivy, as if twining there. Looking through the door of the dainty place you could not see the girl's face; for she had turned her head, and her chin was resting upon her slim, white hands, as she read from a book that lay upon her lap.

Her hair you could see, for it hung over her shoulders and down her white dress, like 'a gold flag over a sail.' For myself I usually prefer dark hair for women; but ah! who could have gainsaid the glory of those luxurious coils that hung over that sweet neck and draping the curving shoulders! Through the open doorway the sun streamed upon it; and the soft tangles gleamed like ruddy gold. Hence you will see that the colour was not that insipid 'blonde' with which shallow girls may adorn their heads for the sum of ten cents.

But although her face could not be seen, anyone looking at the balance of the head, the statuesque neck, would have surmised that it was beautiful....