The Founder of New France A Chronicle of Champlain 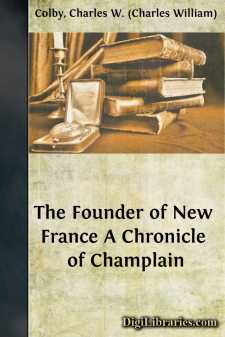 Were there a Who's Who in History its chronicle of Champlain's life and deeds would run as follows:

Champlain, Samuel de. Explorer, geographer, and colonizer. Born in 1567 at Brouage, a village on the Bay of Biscay. Belonged by parentage to the lesser gentry of Saintonge. In boyhood became imbued with a love of the sea, but also served as a soldier in the Wars of the League. Though an enthusiastic Catholic, was loyal to Henry of Navarre. On the Peace of Vervins (1598) returned to the sea, visiting the Spanish West Indies and Mexico. Between 1601 and 1603 wrote his first book—the Bref Discours. In 1603 made his first voyage to the St Lawrence, which he ascended as far as the Lachine Rapids. From 1604 to 1607 was actively engaged in the attempt of De Monts to establish a French colony in Acadia, at the same time exploring the seaboard from Cape Breton to Martha's Vineyard. Returned to the St Lawrence in 1608 and founded Quebec. In 1609 discovered Lake Champlain, and fought his first battle with the Iroquois. In 1613 ascended the Ottawa to a point above Lac Coulange. In 1615 reached Georgian Bay and was induced to accompany the Hurons, with their allies, on an unsuccessful expedition into the country of the Iroquois. From 1617 to 1629 occupied chiefly in efforts to strengthen the colony at Quebec and promote trade on the lower St Lawrence. Taken a captive to London by Kirke in 1629 upon the surrender of Quebec, but after its recession to France returned (1633) and remained in Canada until his death, on Christmas Day 1635. Published several important narratives describing his explorations and adventures. An intrepid pioneer and the revered founder of New France.

Into some such terms as these would the writer of a biographical dictionary crowd his notice of Champlain's career, so replete with danger and daring, with the excitement of sailing among the uncharted islands of Penobscot Bay, of watching the sun descend below the waves of Lake Huron, of attacking the Iroquois in their palisaded stronghold, of seeing English cannon levelled upon the houses of Quebec. It is not from a biographical dictionary that one can gain true knowledge of Champlain, into whose experience were crowded so many novel sights and whose soul was tested, year after year, by the ever-varying perils of the wilderness. No life, it is true, can be fitly sketched in a chronological abridgment, but history abounds with lives which, while important, do not exact from a biographer the kind of detail that for the actions of Champlain becomes priceless. Kant and Hegel were both great forces in human thought, yet throughout eighty years Kant was tethered to the little town of Königsberg, and Hegel did not know what the French were doing in Jena the day after there had been fought just outside a battle which smote Prussia to her knees. The deeds of such men are their thoughts, their books, and these do not make a story. The life of Champlain is all story. The part of it which belongs to the Wars of the League is lost to us from want of records....