The Foundations of Japan Notes Made During Journeys Of 6,000 Miles In The Rural Districts As A Basis For A Sounder Knowledge Of The Japanese People 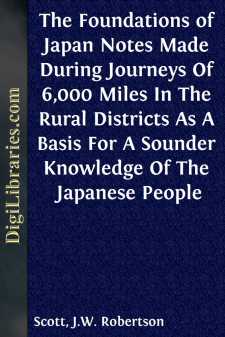 The hope with which these pages are written is that their readers may be enabled to see a little deeper into that problem of the relation of the West with Asia which the historian of the future will unquestionably regard as the greatest of our time.

I lived for four and a half years in Japan. This book is a record of many of the things I saw and experienced and some of the things I was told chiefly during rural journeys—more than half the population is rural—extending to twice the distance across the United States or nearly eight times the distance between the English Channel and John o' Groats.

These pages deal with a field of investigation in Japan which no other volume has explored. Because they fall short of what was planned, and in happier conditions might have been accomplished, a word or two may be pardoned on the beginnings of the book—one of the many literary victims of the War.

The first book I ever bought was about the Far East. The first leading article of my journalistic apprenticeship in London was about Korea. When I left daily journalism, at the time of the siege of the Peking Legations, the first thing I published was a book pleading for a better understanding of the Chinese.

After that, as a cottager in Essex, I wrote—above a nom de guerre which is better known than I am—a dozen volumes on rural subjects. During a visit to the late David Lubin in Rome I noticed in the big library of his International Institute of Agriculture that there was no took in English dealing with the agriculture of Japan. Just before the War the thoughts of forward-looking students of our home affairs ran strongly on the relation of intelligently managed small holdings to skilled capitalist farming. During the early "business as usual" period of the War, when no tasks had been found for men over military age—Mr. Wells's protest will be remembered—it occurred to me that it might be serviceable if I could have ready, for the period of rural reconstruction and readjustment of our international ideas when the War was over, two books of a new sort. One should be a stimulating volume on Japan, based on a study, more sociological than technically agricultural, of its remarkable small-farming system and rural life, and the other a complementary American volume based on a study of the enterprising large farming of the Middle West. I proposed to write the second book in co-operation with a veteran rural reformer who had often invited me to visit him in Iowa, the father of the present American Minister of Agriculture. Early in 1915 I set out for Japan to enter upon the first part of my task. Mr. Wallace died while I was still in Japan, and the Middle West book remains to be undertaken by someone else.

The Land of the Rising Sun has been fortunate in the quality of the books which many foreigners have written. But for every work at the standard of what might be called the seven "M's"—Mitford, Murdoch, Munro, Morse, Maclaren, "Murray" and McGovern—there are many volumes of fervid "pro-Japanese" or determined "anti-Japanese" romanticism....