The Forest of Dean An Historical and Descriptive Account 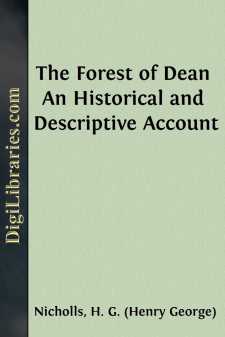 The district known as “the Forest of Dean” is situated within that part of Gloucestershire which is bounded by the rivers Severn and Wye.  Its name is of doubtful origin.  Was it so called from its proximity to the town of Mitcheldean, or Dean Magna, mentioned in Domesday Book, and which, agreeably to its name, is situated in a wooded valley, the word “Dean,” or “Dene,” being Saxon, and signifying a dale or den?—or do we accept the statement of Giraldus, and some other writers, that the Forest of Dean obtained its name from the Danes sheltering themselves in it, secured by its shades and thickets from the retaliation of the neighbouring people, whose country they had devastated?—Or, again, do we “fancy,” with Camden, that “by cutting off a syllable it is derived from Arden, which word the Gauls and Britons heretofore seemed to have used for a wood, since two very great forests, the one in Gallia Belgica, the other amongst us in Warwickshire, are called by one and the same name, Arden”?  This latter suggestion Evelyn, in his ‘Sylva,’ accepts, in which he is supported by the fact that the name of “Dean” is first met with in William the Norman’s survey.

Probably the earliest trace of this locality being inhabited exists in the Druidical rocks which are found on the high lands on the Gloucestershire side of the Wye.  The chief of them is “the Buck Stone,” so called perhaps from the deer which sheltered beneath it, or else from its fancied resemblance to that animal when viewed from certain distant spots.  It is a huge mass of rock poised on the very crest of Staunton Hill, which being of a pyramidal form, and almost 1000 feet high, renders the stone on its summit visible in one direction as far as Ross, nine miles off.  A careful examination of the structure of the rock, and particularly of the character of its base, will show that its position is natural.  But that the Druids had appropriated it to sacrificial purposes, is evident from a rudely hollowed stone which lies adjacent.  In shape “the Buck Stone” is almost flat on the top, and four-sided, the north-east side measuring sixteen feet five inches, the north seventeen feet, the south-west nine feet, and the south side twelve feet.  The face of the rock on which it rests slopes considerably, and the bearing point is only two feet across.  This part may be an unbroken neck of rock, but apparently the entire block has crushed down upon its base, as though, from having once formed the extremity of the portion of cliff near, it had fallen away, and had accidentally balanced itself in its present position.   The texture of “the Buck Stone” is similar to that of the slab of rock on which it rests, commonly known as the old red sandstone conglomerate of quartz pebbles (a stratum of which extends through the whole district), exceedingly hard in most of its veins, but very perishable in others; and hence perhaps the form and origin of this singular object.

In addition to the above, there is a large mass of grit-stone, from nine to ten feet high, standing in a field on the north side of the road leading from Bream to St. Briavel’s, named “the Long Stone.”  Another, called by the same name, and of similar character, occurs on the north-east side of the Staunton and Coleford road; but nothing remarkable is known of either of them, only their weather-worn appearance shows that they have been exposed to the action of the elements during many centuries.

Next in order of time to the above remains are the ancient Iron-mines, locally termed “Scowles,” which were undoubtedly worked when this island was occupied by the Romans.  This appears certain from the coins, &c., which have been found deeply buried in the heaps of iron cinders derived from the workings of these mines.  A highly interesting MS....