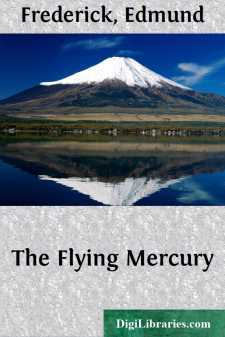 he roaring reports of the motor fell into abrupt silence, as the driver brought his car to a halt.

"You signaled?" he called across the grind of set brakes.

In the blending glare of the searchlights from the two machines, the gray one arriving and the limousine drawn to the roadside, the young girl stood, her hand still extended in the gesture which had stopped the man who now leaned across his wheel.

On either side stretched away the Long Island meadows, dark, soundless, apparently uninhabited. Only this spot of light broke the monotony of dreariness. A keen, chill, October wind sighed past, stirring the girl's delicate gown as its folds lay unheeded in the dust, fluttering her fur-lined cloak and shaking two or three childish curls from the bondage of her velvet hood. The driver swung himself down and came toward her with the unhasting swiftness of one trained to the unexpected.

"We are lost," she confessed hurriedly. "If you could set us right, I should be grateful. I—we must get home soon. I have been a guest at a house somewhere here, and started to return to New York this afternoon. The chauffeur does not know Long Island; we can not seem to find any place. And now we have lost a tire. I was afraid—"

She broke off abruptly, as her companion descended from the limousine.

"We only want to know the way; we're all right," he explained. "This is my cousin; I came out after her, you see. Don't get so worried, Emily—we'll go straight on as soon as Anderson changes the tire."

He huddled his words slightly and spoke too rapidly, the round, good-humored face he turned to the white light was too flushed; otherwise there was nothing unusual in his appearance. And his caste was evident and unquestionable, in spite of any circumstance. There was no anger in the girl's dark eyes as she gazed straight before her, only pity and helpless distress.

"I can tell your chauffeur the road," the driver of the gray car quietly said. "Have you far to go?"

"No; you can reach there by ten o'clock. I will speak to your chauffeur."

"Do, like a good fellow," the other man interposed. "Awfully obliged. You're not angry, Emily," he added, lowering his voice, and moving nearer her. "Since we're engaged, why should you get frightened simply because I proposed we get married to-night instead of waiting for a big wedding? I thought it was a good idea, you know. It isn't my fault Anderson got lost instead of getting us home for dinner, is it?"

"Hush, Dick," she rebuked, hot color sweeping her face. "You, you are not well. And we are not engaged; you forget. Just because people want us to be—" Too proud to let her steadiness quiver, she broke the sentence.

If the driver had heard, and it was scarcely possible that he had not, he made no sign. By the acetylene light he produced an envelope and pencil, and proceeded to sketch a map, showing the route to the limousine's chauffeur.

"Understand it?" he queried, concluding....