The Flower of the Chapdelaines 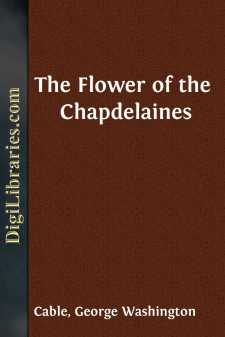 Next morning he saw her again.

He had left his very new law office, just around in Bienville Street, and had come but a few steps down Royal, when, at the next corner below, she turned into Royal, toward him, out of Conti, coming from Bourbon.

The same nine-year-old negro boy was at her side, as spotless in broad white collar and blue jacket as on the morning before, and carrying the same droll air of consecration, awe, and responsibility. The young man envied him.

Yesterday, for the first time, at that same corner, he had encountered this fair stranger and her urchin escort, abruptly, as they were making the same turn they now repeated, and all in a flash had wondered who might be this lovely apparition. Of such patrician beauty, such elegance of form and bearing, such witchery of simple attire, and such un-Italian yet Latin type, in this antique Creole, modernly Italianized quarter--who and what, so early in the day, down here among the shops, where so meagre a remnant of the old high life clung on in these balconied upper stories--who, what, whence, whither, and wherefore?

In that flash of time she had passed, and the very liveliness of his interest, combined with the urchin's consecrated awe--not to mention his own mortifying remembrance of one or two other-day lapses from the austerities of the old street--restrained him from a backward glance until he could cross the way as if to enter the great, white, lately completed court-house. Then both she and her satellite had vanished.

He turned again, but not to enter the building. His watch read but half past eight, and his first errand of the day, unless seeing her had been his first, was to go one square farther on, for a look at the wreckers tearing down the old Hotel St. Louis. As he turned, a man neat of dress and well beyond middle age made him a suave gesture.

"Sir, if you please. You are, I think, Mr. Chester, notary public and attorney at law?"

"That is my name and trade, sir." Evidently Mr. Geoffry Chester was also an American, a Southerner.

"Pardon," said his detainer, "I have only my business card." He tendered it: "Marcel Castanado, Masques et Costumes, No. 312, rue Royale, entre Bienville et Conti."

"I diz-ire your advice," he continued, "on a very small matter neither notarial, neither of the law. Yet I must pay you for that, if you can make your charge as--as small as the matter."

The young lawyer's own matters were at a juncture where a fee was a godsend, yet he replied:

"If your matter is not of the law I can make you no charge."

The costumer shrugged: "Pardon, in that case I must seek elsewhere." He would have moved on, but Chester asked:

"What kind of advice do you want if not legal?"

The young man smiled: "Why, I'm not literary."

"Yes, and old buildings, and their histories. I know. You are now going down, as I have just been, to see again the construction of that old dome they are dim-olishing yonder, of the once state-house, previously Hotel St....