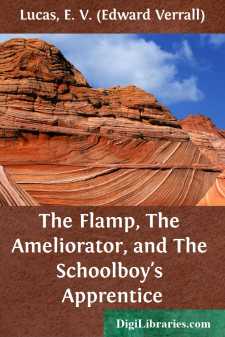 That sunny afternoon in May,How stealthily we crept away,We three—(Good things are done in threes:That is, good things in threes are doneWhen you make two and I make one.)—To hatch our small conspiracies! Between the blossomy apple-trees(You recollect?) we sped, and thenSafe in the green heart of the woodWe breathed again.The purple flood the bluebells madeWashed round about us where we stood,While voices, where the others played,Assured us we were not pursued. A fence to climb or wriggle through,A strip of meadow wet with dewTo cross, and lo! before us flaredThe clump of yellow gorse we sharedWith five young blackbirds and their mother.There, close beside our partners' nest,And free from Mr. C. (that pest!),And careless of the wind and damp,We framed the story of The Flamp. And O! Collaborators kind,The wish is often in my mind,That we, in just such happy plight,—With Chanctonbury Ring in sight,—Some day may frame another. E. V. L.1896. I

Once upon a time there dwelt in a far country two children, a sister and a brother, named Tilsa and Tobene. Tilsa was twelve and Tobene was ten, and they had grown up, as it were, hand in hand. Their father died when Tobene was only a little piece of pink dimpled dough, and when their mother died too, a few years after, old Alison was told to pack up the things and journey with Tilsa and Tobene to the children's grandfather, the Liglid (or Lord Mayor) of Ule, whom they had never yet seen.

Old Alison was their nurse, and she had been their father's nurse before them. Nothing worth knowing was unknown to old Alison: she could tell them where the fairies danced by night, and the names and habits of the different people who live in the stars, and the reason why thrushes' eggs have black spots and hedge sparrows' none, and how to make Toffee of Paradise, and a thousand useful and wonderful things beside.

Alison was old and wrinkled and bent, but there was not a warmer heart in all the world, and no tongue could say kinder words than hers, and no hands minister so lovingly to those who needed help. It was said that Alison had only to look at a sore place and it was healed again. If any one loved her more than Tilsa it was Tobene; and if any one loved her more than Tobene it was Tilsa; and old Alison's love for them was as strong.

On the day appointed, the three travellers set forth in a chariot driven by postilions, and in the course of a week's journeying through strange countries came at last to Ule.

At the southern gate they were met by the Liglid. They discovered him to be more than a mere person—a Personage!—with white hair, and little beady eyes, and a red nose, and a gold-laced hat.

'Welcome,' said he, 'welcome, Tilsa and Tobene, to the city or Ule.' And then he kissed the air an inch or two from the cheek of his grandchildren and led the way to his house.

Ule was a little city in the midst of a wide plain, and round about it was a stout wall. One straight, white road crossed the plain from end to end, entering the city at the northern gate and leaving it by the southern gate....