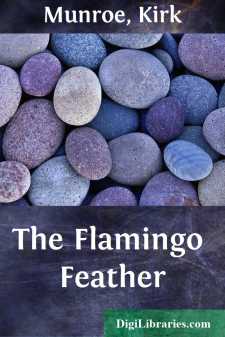 On a dreary winter's day, early in the year 1564, young Réné de Veaux, who had just passed his sixteenth birthday, left the dear old chateau where he had spent his happy and careless boyhood, and started for Paris. Less than a month before both his noble father and his gentle mother had been taken from him by a terrible fever that had swept over the country, and Réné their only child, was left without a relative in the world except his uncle the Chevalier Réné de Laudonniere, after whom he was named. In those days of tedious travel it seemed a weary time to the lonely lad before the messenger who had gone to Paris with a letter telling his uncle of his sad position could return. When at length he came again, bringing a kind message that bade him come immediately to Paris and be a son to his equally lonely uncle, Réné lost no time in obeying.

He travelled like a young prince, riding a spirited steed, and followed by a party of servants, mounted and armed to protect him against robbers and other perils of the way. Behind him rode old François, who had been his father's valet and was now his sole friend and protector. The big tears rolled down the boy's cheeks as he turned for a last look at his home; but as it was shut from view by the trees of the park surrounding it, he brushed them away resolutely, and turning to his companion, said,

"Thou hast seen the last of my tears, François, and with them goes my boyhood; for hereafter I am to be a man, and men know not how to weep."

"Well spoken, my young master," replied the old servant, greatly pleased at the brave words of the lad. "Thou art already a man in feeling, and thine Uncle Laudonniere will presently make thee one in fact, if the tales that come to us of his valorous deeds be true, and there is naught to disprove them."

"Tell me of him, François; for though he is my only uncle, I have but little knowledge of him or his deeds. Of what nature are they?"

"Well, then, he is a mighty navigator, and 'tis but little more than a year since he returned from the New World, whither he sailed in company with his Excellency Admiral Jean Ribault. He brings strange tales of those wonderful lands beyond the sea, and rumor has it that he is shortly to set forth again for them with a noble company, who will establish there a sanctuary for our blessed Protestant faith."

The boy's interest was thoroughly aroused by this, and he plied the old servant with questions concerning his uncle and the New World. François answered these to the best of his ability, and even drew largely upon his imagination to aid his glowing descriptions of those distant lands of which the men of that day held such vague knowledge.

With such talk they beguiled much of the tedious journey, that occupied a week ere it was ended and they entered Paris. Here they were finally set down before a modest dwelling near the King's palace, in which Laudonniere was lodged.

Upon meeting his nephew, the chevalier embraced him warmly, and then holding him forth at arm's-length to gain a better view of him, exclaimed, "In good sooth, Réné, thou'rt a likely lad; and if thy heart be as true and bold as thy face promises, we'll soon make a man of thee such as even thy noble father would approve."

That evening uncle and nephew talked long and earnestly together concerning the latter's future; and ere they slept it was fully decided that, in spite of his youth, he should make one of the expedition that, even as François had reported, Laudonniere was fitting out for the New World....