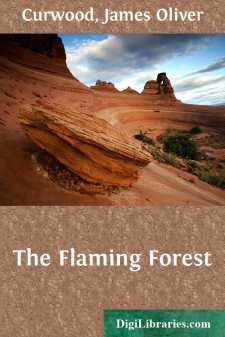 An hour ago, under the marvelous canopy of the blue northern sky, David Carrigan, Sergeant in His Most Excellent Majesty's Royal Northwest Mounted Police, had hummed softly to himself, and had thanked God that he was alive. He had blessed McVane, superintendent of "N" Division at Athabasca Landing, for detailing him to the mission on which he was bent. He was glad that he was traveling alone, and in the deep forest, and that for many weeks his adventure would carry him deeper and deeper into his beloved north. Making his noonday tea over a fire at the edge of the river, with the green forest crowding like an inundation on three sides of him, he had come to the conclusion—for the hundredth time, perhaps—that it was a nice thing to be alone in the world, for he was on what his comrades at the Landing called a "bad assignment."

"If anything happens to me," Carrigan had said to McVane, "there isn't anybody in particular to notify. I lost out in the matter of family a long time ago."

He was not a man who talked much about himself, even to the superintendent of "N" Division, yet there were a thousand who loved Dave Carrigan, and many who placed their confidences in him. Superintendent Me Vane had one story which he might have told, but he kept it to himself, instinctively sensing the sacredness of it. Even Carrigan did not know that the one thing which never passed his lips was known to McVane.

Of that, too, he had been thinking an hour ago. It was the thing which, first of all, had driven him into the north. And though it had twisted and disrupted the earth under his feet for a time, it had brought its compensation. For he had come to love the north with a passionate devotion. It was, in a way, his God. It seemed to him that the time had never been when he had lived any other life than this under the open skies. He was thirty-seven now. A bit of a philosopher, as philosophy comes to one in a sun-cleaned and unpolluted air, A good-humored brother of humanity, even when he put manacles on other men's wrists; graying a little over the temples—and a lover of life. Above all else he was that. A lover of life. A worshiper at the shrine of God's Country.

So he sat, that hour ago, deep in the wilderness eighty miles north of Athabasca Landing, congratulating himself on the present conditions of his existence. A hundred and eighty miles farther on was Fort McMurray, and another two hundred beyond that was Chipewyan, and still beyond that the Mackenzie and its fifteen-hundred-mile trail to the northern sea. He was glad there was no end to this world of his. He was glad there were few people in it. But these people he loved. That hour ago he had looked out on the river as two York boats had forged up against the stream, craft like the long, slim galleys of old, brought over through the Churchill and Clearwater countries from Hudson's Bay. There were eight rowers in each boat. They were singing. Their voices rolled between the walls of the forests. Their naked arms and shoulders glistened in the sun....